This is the fifth of the “six” boroughs blog series celebrating Nonstop Metropolis: A New York City Atlas by Rebecca Solnit and Joshua Jelly-Schapiro. We’ve already visited Brooklyn, Queens, the Bronx, and Staten Island. If you missed the prior posts, we encourage you to go back and read them after you’ve finished reading about Manhattan.

New York City is the cradle of American book publishing (though as this California publisher knows, great books come from all over), and it all started with brothers James and Joseph Harper and their ability to print books at high volumes—thanks to the stereotyping printing process—inexpensively for a mass market.

In what would become Harper’s magazine and the publishing house HarperCollins, the brothers first began their publishing operation two years before the birth of one of the great American writers: Herman Melville. It’s also fascinating to learn that as a great American publisher, Harper & Brothers first rejected Melville and his book, Typee, because it was too fantastic to be true.

G.P. Putnam would go on to publish Typee,  which became a best-seller, and Harper and Brothers would pick up Melville’s next six books, including his most famous.

Most people associate Herman Melville with the high seas and a big, white whale, but the Moby-Dick author was quite the urbanite. A native New Yorker, Melville was born in 1819 on Pearl Street in the Battery at Manhattan’s southern end, which he described as the “extreme down-town” and “the insular city of the Manhattoes” who—dreaming of the sea—rushed to the island’s tip.

“There now is your insular city of the Manhattoes, belted round by wharves as Indian isles by coral reefs—commerce surrounds it with her surf. Right and left, the streets take you waterward. Its extreme down-town is the battery, where that noble mole is washed by waves, and cooled by breezes, which a few hours previous were out of sight of land. Look at the crowds of water-gazers there.
Circumambulate the city of a dreamy Sabbath afternoon. Go from Corlears Hook to Coenties Slip, and from thence, by Whitehall, northward. What do you see?—Posted like silent sentinels all around the town, stand thousands upon thousands of mortal men fixed in ocean reveries.”—Herman Melville, Moby-Dick

But Melville may not have had such romantic feelings for the city that would at times spurn him. Moby-Dick received terrible reviews, as did Melville’s other works, which Paul LaFarge details in his essay “Sailors and Scriveners”:

Moby-Dick was published in 1851 to famously bad reviews, and it sold poorly—but nowhere near as poorly as Melville’s next novel, Pierre; or, The Ambiguities, which is about a young man who brings a great deal of suffering on himself by becoming a writer and moving to New York. Pierre earned Melville $157 during his lifetime and was reviewed by the New York Day Book under the headline “Herman Melville Crazy.” Melville was wrecked . . . By the end of the 1850s, Melville had little reason to love New York City, and yet in 1866 he moved there once again . . .

Like a sailor drawn to the sea, Melville couldn’t leave New York entirely. But perhaps the strongest connection between New York’s publishing industry and the whaling industry is Herman Melville as he tried his hand at both. In the map “Harper’s and Harpooners” featured in Nonstop Metropolis, you can see more of the physical, historical connections between these uniquely different industries.

Take a closer look below to stroll through Melville’s Manhattan (click on the map to expand it). 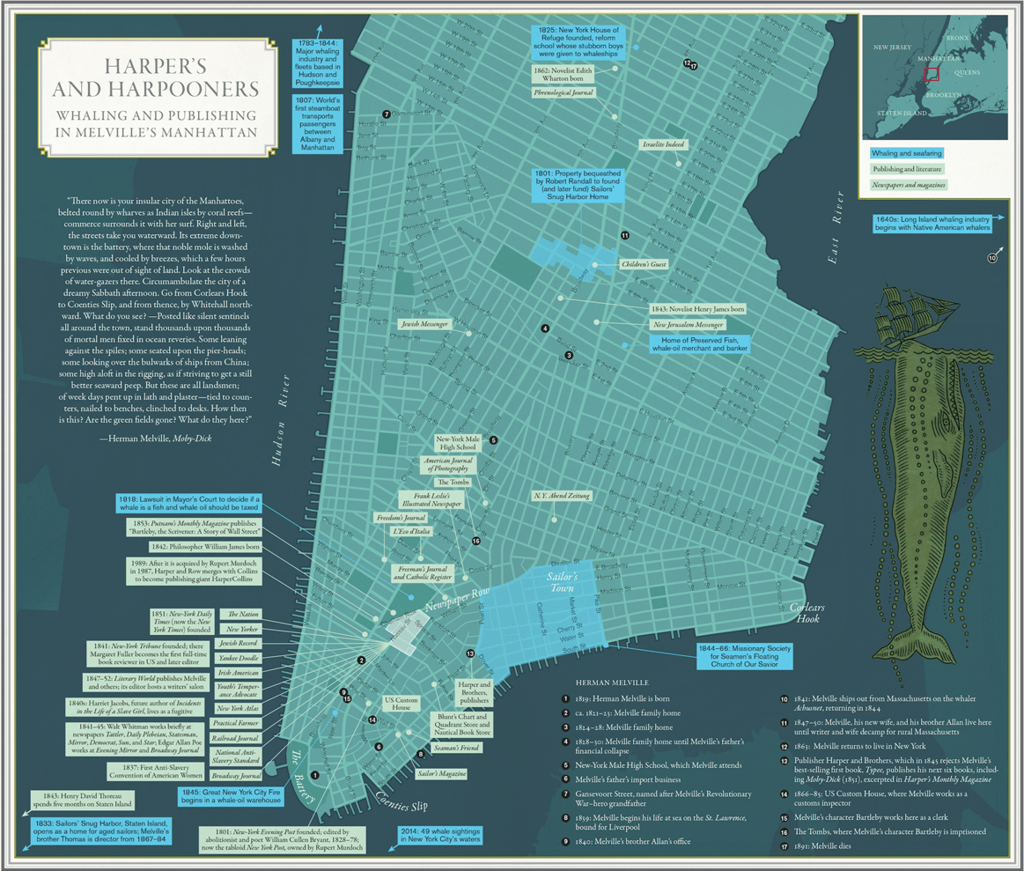 More than Bunnies and Battlefields: The Evolution of Social Policy in the National Park Service
Killing Your Neighbors