The presidential campaign of 2016 will long be remembered for a number of things, perhaps most prominently for its focus on immigrants. Amid Republican nominee Donald J. Trump’s call to build a massive wall along our southern border and to halt Muslim immigration, the foreign-born were thrust into the eye of the election storm. But American history is filled with such instances, which is what one might expect of a nation of immigrants (Kennedy) and a nation with the soul of a church (Chesterton). To help us stand back and understand the longer story of religious immigrants’ relationships to other aspects of American life, we offer a special virtual issue featuring five excellent pieces from Religion and American Culture—one Forum and four articles. 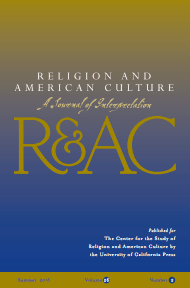 cles gathered in this virtual issue address immigration across a variety of historical contexts and religious groups: the differences between the religious aspects of the old immigration and the new immigration; the conversion of Irish immigrants from Catholicism to Protestantism in America; how marginalized religious groups strive for national belonging through community service; the transnationalism of the lived religious experiences of many Mexican and Mexican American Catholics; and the revitalization of urban Christianity by collaborative relationships between existing congregations and Asian, Latino, African, and Caribbean immigrants since the 1960s.

These pieces situate immigrants at the heart of American religious life. In doing so, they reveal new and important understandings of the relationship between religion and other aspects of society, which is the purpose of Religion and American Culture. We encourage those studying religion and American culture through the lens of immigrant and transnational faiths to send us your work, as this subject continues to define who we are—and not just at election time.

Looking Back at Loft Jazz
Singing the City, A Nonstop Metropolis Playlist for Brooklyn and Queens

The 2015 American Studies Association is Coming to Toronto!