This past weekend saw cartographers from the world over gather in Colorado Springs, CO for the North American Cartographic Information Society’s annual meeting. On Saturday eve, the Corlis Benefideo Award for Imaginative Cartography was presented to Rebecca Solnit. Attending in her stead, Joshua Jelly-Schapiro, co-author of Nonstop Metropolis: A New York City Atlas, accepted the award on Solnit’s behalf.

In addition, Jelly-Schapiro delivered the keynote address, where he discussed in detail the maps from the city atlas series. His comparison of a scribe being awarded a cartography prize—by the top mappists in the land—being a bit like Bob Dylan winning his Nobel Prize in Literature was met with appreciation (and laughter) from the crowd.

As Dylan to his Nobel: this cartography prize, from the marvelous mappists of #nacis, for a scribe + @nonstopatlas. THANK YOU awesome @NACIS pic.twitter.com/9xd9VP65K8

Below is the speech penned by Rebecca and delivered by Josh. And, thanks to the world we live in, we could follow along via live reports from the scene:

Including a shout-out for the work of contributing cartographer, Chris Henrick:

Many years ago, I heard my dear friend and mentor Barry Lopez read his story “The Mappist,” in which the character Corlis Benefideo appears. I loved it, and of everything Barry’s ever written that I know, it seems most like Jorge Luis Borges’s work: a proposition about the possibilities of the world and the objects in it—in this case, maps and atlases, and their capacity to tell stories, transmit wonder, elicit passion, deepen our sense of place, and become compelling works of art. The story proposes other kinds of beauty than the ones we commonly hear about: the beauty of meaning, of devotion manifested through longterm projects, of intimate sense of place, and of maps as aesthetic objects.

To receive an award for maps of real places named after a fictional character is magical realism enough, but I want to exult in the fact that Barry Lopez wrote a small gem of an essay for the final atlas in our trilogy: Nonstop Metropolis: A New York City Atlas, co-directed and co-edited by Joshua Jelly-Schapiro, who’s come to accept the award on behalf of this eight-year three-volume project of mapping the three cultural capitals, the three island republics, that adorn the three coasts of the Lower 48. To receive an award named after a fictional character by a writer who also appears in the work for which the award is given is convoluted in a wonderful way, a moebius strip of friendship and impact, a tribute to how we make the world we inhabit.

I am sorry I can’t be here tonight, not least to try to recruit a few dozen cartographers for any future projects that may arise, but I’m truly grateful and deeply honored. Who better to decide the merits of our adventures in mapping than the people who make maps? I want to thank the cartographers I’ve worked with on these three books, Ben Pease, the main cartographer for the first atlas, Shizue Seigel for the second, and Molly Roy for the third, with extraordinary contributions by Richard Campanella, Chris Henrick, Darin Jensen, Jakob Rosenzweig and Ruth Askevold of the Estuary Institute, all designed into harmonious glory by Lia Tjandra of UC Press.

There are two kinds of books, and the kind that have maps in them have always struck me as slightly better, whether they’re maps of fictional places, as with the Lord of the Rings trilogy (and its beautiful maps hand-drawn by Tolkien’s son, or of places on this earth, as with the endpapers for Bernard DeVoto’s 1846: Year of Decision or so many of the western and urban books that fed my ideas about place and about the possibilities of maps. Maps are invitations to dream, to travel in our heads, to contemplate places and movements and relationships. Like no other kind of art, they invite us to imagine our own movements across the space depicted.

I began making atlases for several reasons, and I learned so much about maps as I went along. I wanted to make a series of propositions about cities that maps could make in ways my lifelong main medium, writing, doesn’t. If the narrative we call a storyline is like a road, a path, a river, then a map allows multiple storylines and times to overlap, collide, converge, and intersect. My first proposition in the maps we made was that cities are places of myriad coexistences between complementary and competing phenomena. The second was that cities are intellectually infinite: you can just map the roads and the parking and maybe the shopping or restaurants and leave it at that, and most utilitarian maps do, but there’s no reason why you can’t map the butterfly species or queer public spaces, the musical history or crime scenes or carbon footprints or spiritual life and sea level rise. Maps are versions of places, and every place exists in innumerable versions. The old Borges story about the map on a 1:1 scale with the territory was a joke, because even that wouldn’t represent anything near the innumerable meanings, histories, presences, contexts a place has, though many maps could at least hint at that complexity. Maybe a third was that though the history of maps is often imperial and colonial, mapping can serve justice, diversity, forgotten histories, erased groups, marginalized communities.

Another concern of mine was the role and value of maps in our lives in an era where many are leaving paper behind not for digital maps, but for digital directions. I’ve been struck by how many younger people are not map-users, but are phone-users, and how those of us who use maps internalize the knowledge so that, in a sense, we become atlases, become oriented, capable of traversing a place knowledgeably (or of getting lost without being helpless because we’ve learned to negotiate the unknown with skill). Thus it is that a paper map can be truly interactive, while a navigational device is something users depend on every time to issue instructions (or asking a local for directions). We learn to command the information on a map but submit to the orders of a device. I wanted to celebrate what maps have been and what they can be, portals to places and spaces through which we travel imaginatively in places we know and places we will never go. One of the things that I discovered along the way is that a great many people passionately love maps and respond to them with a joy that is unlike that elicited by any other art form.

At this point, I feel as if maps are themselves a territory, one I have begun to wander in and get to know a little. This wonderful award feels like an invitation to keep exploring what maps have been, are, and can be. So thank you again, citizens of the territory of maps.

Where the territory, as old Corlis knew it might, turns map: this smashing model SF for #Solnit from @kelsosCorner @NACIS. @nonstopatlas pic.twitter.com/Eynt201rHK

This post is part of a series on the atlas trilogy. 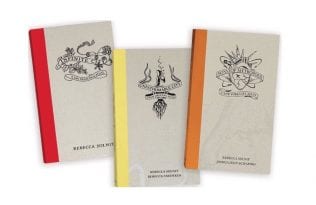 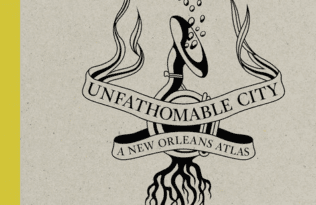