This is the third of the “six” boroughs blog series celebrating Nonstop Metropolis: A New York City Atlas by Rebecca Solnit and Joshua Jelly-Schapiro. We’ve already visited Queens and the Bronx. If you missed the prior posts, we encourage you to go back and read them after you’re done here.

From 1947 to 2001, New York City sent its trash to Fresh Kills, a Staten Island wetlands turned municipal dump, which at its peak receives 29,000 tons of trash per day, ranking as the largest human-made structure on earth. Now, New York’s residential garbage, close to 4 million tons of it a year, is shipped by barge and truck to distant landfills, from Niagara Falls to South Carolina. Fresh Kills received its last waste from Manhattan when it absorbed the rubble from the World Trade Center after September 11, 2001. Holding approximately 108 million tons of trash, it covers 2,200 acres, and is being turned into a park, which when completed will be almost three times the size of Central Park.

The rest of New York complains that Staten Island is a sleepy, insular borough (that’s more like a suburb) that is not worth the effort of exploring. Staten Islanders argue that the rest of the city is a filled with a bunch of parochial bellyachers who have not taken the time to get to know Staten Island’s natural beauty and increasingly diverse population. What everyone agrees on, however, is that the Wu-Tang Clan is the borough’s most well-known entity—and beloved export. In Nonstop Metropolis Joshua Jelly-Schapiro interviews RZA about what it was like growing up on Staten Island.

Joshua Jelly-Schapiro: You grew up between Staten Island and Brooklyn; you lived in public housing in both boroughs. But by your teens you were in Staten Island pretty full time. How did Staten Island compare to Brooklyn in those days, when you were growing up? What do you remember of each?

RZA: One thing about Staten Island that was different from Brooklyn was the ability to walk from one neighborhood to another, to actually have a break from project life. For instance, in Brownsville, in Brooklyn, if I walked from the Marcus Garvey projects to go see my cousin Vince, who lived in the Van Dyke projects, I had to walk through four projects to get there—and each project could be considered “turf.” In fact, each building could be considered turf. But on Staten Island, you can walk from the Park Hill projects to the Stapleton projects, and in between those two projects is something else—”normal” hardworking homeowners, you know. Not projects. When I was on Staten Island I walked a lot—I’d walk from Park Hill to Stapleton, and then from Stapleton to New Brighton. I would take the route that led up Targee Street, and make the right down Van Duzer, and then take Cebra. And on Cebra and Van Duzer, I saw what we’d consider mansions then, big homes. And I think seeing another side of life, that wasn’t ghetto life—I think there was something healthy about that. When I was living in Staten Island in sixth grade, when a snowstorm happens, guess what I’m able to do—I’m able to get out, pull out a shovel, and make $15 hustling, shoveling snow. That wasn’t available in Brownsville. You had breathing space. You were able to walk a few blocks, not worried about fighting, defending, stealing, robbing—things that happen every day in the projects.

To read the rest of the interview, purchase Nonstop Metropolis: A New York City Atlas wherever books are sold. 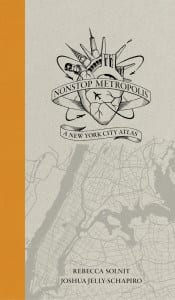 Meanwhile, please sit back and listen to some Wu-Tang Clan.