This is the second of the “six” boroughs blog series celebrating Nonstop Metropolis: A New York City Atlas by Rebecca Solnit and Joshua Jelly-Schapiro. If you missed the first in the series, on Queens, you can read that here.

One of the most enduring images of the Bronx is that of a “burning Bronx.” Memorialized by the now well-know phrase “The Bronx is Burning,” we typically think of the Bronx as a borough of misfortune and loss. In the 1950s Robert Moses and his Cross Bronx Expressway tore through the South Bronx. The 1970s brought the fires, a result of declining property values and poor management of city finances. Today, the Bronx is home to one of the five poorest Congressional districts in the U.S. However, the real story of the Bronx is one of growth, natural beauty, and creativity.

The Bronx is home to one of New York City’s oldest treasures: the Thain Family Forest, 50 acres of the last remaining old-growth forest that originally blanketed the area. Trees in the forest date back to the 18th century, and are situated within the New York Botanical Garden, 250 acres of over one million living plants. The old-growth forest is not only home to centuries old trees, but to wildlife habitats, including coyotes, bald eagles,  and North American river otters. 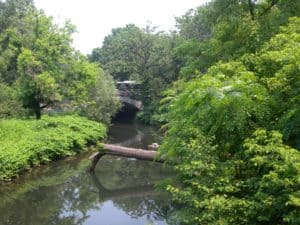 The Bronx is well-known as the birthplace of hip hop, but techniques and styles that we take for granted now were groundbreaking and spreading throughout the Bronx in the early 1970s. Grand Wizzard Theodore started scratching records in 1975, when he was only thirteen. In Nonstop Metropolis he shares his memories of growing up in the Bronx.

I lived here in the Bronx, so hip-hop was always around me. When I’d go to the train station I’d see the graffiti on the trains. When I’d go to the parks I’d see the b-boys b-boying. As far as the MCs, there were always guys on the corner harmonizing and freestyling. And then once I saw my brother Mean Gene and Grandmaster Flash with two turntables and a mixer—that’s when I realized I was born into a culture we call hip-hop.

Back the [the parties we threw] were just called jams. We would go into abandoned buildings and do jams and charge people $1.99 or 99 cents to come in. We were doing “hooky parties”—people would skip school and go to the jams and everybody would throw their book bags to the side and we’d play music until three o’clock.

Perhaps nobody better expresses the re-birth of the Bronx than Marshall Berman, whose essay “New York: Seeing through the Ruins” is included in Nonstop Metropolis. Below is an excerpt: I can remember when I first heard “The Message” blaring from a West Harlem record shop, in the Reagan summer of 1982. Right away I was thrilled. It wasn’t so long ago that I’d lost a kid (Marc Berman, 1975-1980); I’d been pretty low. Was I moving my limbs again? Now these kids from the city’s most horrendous ruins had created a masterpiece that looked the negative in the face and lived with it, and still dreamt of coming through. I thought, if they could dream this, then damn it, we were going to come through. I knew New York still had plenty of sorrow ahead. There were homeless families all over the streets and in the subways. A dear friend of mine had just died of AIDS—and I don’t think it had even been named AIDS. I couldn’t even conceive of crack, our 1980s twist of fate. But I knew our Via Dolorosa had a long way to run. Still, of all the forms of suffering, I thought, the worst is where your imagination shuts down. Once you can imagine getting out of the hole you’re in, even if you can’t imagine how, the worst is past.

Nonstop Metropolis: A New York City Atlas is the final volume in our trilogy of atlases by Rebecca Solnit, Joshua Jelly-Schapiro, Rebecca Snedeker, and a host of notable contributors. Following the publication of the critically lauded Infinite City (San Francisco) and Unfathomable City (New Orleans), we bring you this homage—and challenge—to the way we know New York City, an exquisitely designed and gorgeously illustrated atlas that excavates the many buried layers of all five boroughs of New York City and parts of New Jersey. Preorder your copy today.

A Passion for Society: How We Think about Human Suffering
The Future of Point Reyes

The “Six” Boroughs: A Focus on Queens