The following excerpt from Andrew Cornell‘s introduction to Left of the Left: My Memories of Sam Dolgoff is reproduced with the kind permission of AK Press.

Until very recently, the history of anarchism in the middle part of the twentieth century has remained frustratingly opaque. Anatole Dolgoff’s memoir of his father, Sam, and the worlds of work and activism Sam inhabited, is a unique gift in that it sheds both light and warmth on this period. Readers learn not only who knew whom and how anarchists reacted to major historical events, but also gain real insight into the emotional and family lives, the motivations and coping strategies, of a network of stalwart radicals confronting the highs and lows of the American Century.

Sam Dolgoff was a house painter, a loving husband and father, a militant labor organizer, a powerful orator, and a self-taught public intellectual. He was not, perhaps, as daring and globetrotting a figure as Emma Goldman or the subjects of some other radical biographies. To hilarious and heart-breaking effect, Anatole describes the way Carlo Tresca and other mentors talked Sam out of joining street fights with Italian-American fascists or shipping out to fight in the Spanish Revolution, owing to his poor eyesight and family responsibilities. But Sam Dolgoff was heroic in a least one respect, and that was his tenacity. 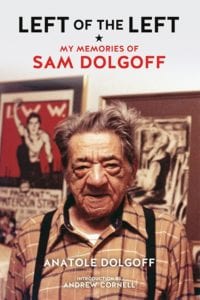 Sam stuck to his bedrock beliefs that humans were capable of cooperating with one another, managing their own affairs, and sharing earth’s wealth equitably. For seven decades he continued to express these ideas in print and speech. And he continued to show up—to demonstrations, to lightly attended forums, and to tedious meetings—even when many of his former collaborators had given up. In doing so he served as a connecting thread that stitched together generations of people invested in the project of human liberation. His willingness and ability to play this bridging role is powerfully exemplified in the story Anatole tells of Sam taking members of the countercultural Up Against the Wall/Motherfuckers group to beg financial assistance from octogenarian friends of Sacco and Vanzetti in the late 1960s.

It also becomes readily apparent that Sam and his wife Esther truly lived the communal ethos they espoused. Hardly a chapter of this memoir passes without an account of old Wobblies camped out on the Dolgoffs’ living room sofa, or Sam giving away prized possessions to a new acquaintance. This spirit of selflessness is mirrored in the structure of the book, for Anatole’s portrait of his father soon spins off to recount the stories of his mother (herself a dedicated anarchist organizer), other family members, and more than a dozen fascinating revolutionaries, such as Russell Blackwell, Ben Fletcher, Dorothy Day, and Federico Arcos, whose own stories and contributions are in danger of being lost to history. The book, then, serves as the collective biography of an entire milieu, echoing the fashion in which Goldman studded her own autobiography, Living My Life, with biographical sketches of comrades and lovers. 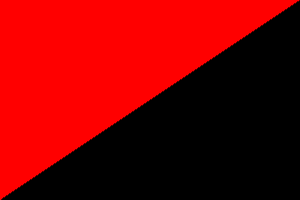 (Pictured above: the red and black flag used as anarchy symbol. The flag is commonly associated with Anarcho-communists, a branch of Anarchism closely associated with labor organizations. The red portion of the flag represents labor; the black, anarchism; image ineligible for copyright/in the public domain.)

These stories are not always rousing. We meet aging seafarers and longshoremen grown cynical and lonely following the cascading catastrophes of the Red Scare, the repressive turn in world communism, and the defeat of the Spanish Revolution. But that is part of what makes this book so fascinating; where else can one glimpse the interior life of old Wobblies still devoted to class war as they watch fellow workers embrace middle-class identities and the anarchist movement become overrun with college students? As these sections unfurled, I recognized the double entendre tucked into the book’s title; this is not only the story of a man who was more radical than many other rabble-rousers, but also an account of what remained—what was left—of the Left during the years that Anatole was growing up. That the book is, at other turns, incredibly funny testifies to the author’s skills as a writer and raconteur—especially his ear for dialogue.

The later chapters of Left of the Left discuss Sam’s contributions to anarchist scholarship, such as his important books on Bakunin’s thought and the Spanish and Cuban revolutions. Sam taught himself to read multiple foreign languages to better understand international events and keep abreast of anarchist and labor struggles throughout the world. He penned prescient analyses of postcolonial governments, technological change, and the shortcomings of centrist labor unions, while providing crucial information to the historian Paul Avrich, to whom we owe much of what is known about pre-WWI U.S. anarchism. This production and preservation of fugitive knowledge, outside the university and other official channels, should be seen as another important form of activism, from which we, as readers, can learn and take inspiration. I am grateful that Anatole Dolgoff chose to follow in his parents’ footsteps, in this regard—to collect and protect the stories and the hard-won knowledge of earlier generations of radicals, knowing there would be a time, like now, when many people would be ready and eager to hear them. 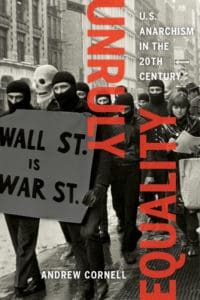 Andrew Cornell is an educator and organizer who has taught at Williams College, Haverford College, and Université Stendhal-Grenoble 3. He is the author of Unruly Equality: U.S. Anarchism in the Twentieth Century (published by UC Press), and Oppose and Propose! Lessons from Movement for a New Society (AK Press).

The Coffeehouse Tradition: Debate and Discussion