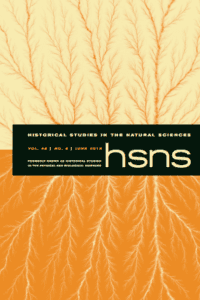 In celebration of #NationalWildlifeDay, enjoy free access to select articles from Historical Studies in the Natural Sciences, today through September 18.

Paul Errington, Aldo Leopold, and Wildlife Ecology: Residential Science
Robert E. Kohler (Vol. 41, No. 2, Spring 2011)
Place shapes field science: not just the place where research is carried on, but the places where investigators have been in their mobile careers.

Endangered Science: The Regulation of Research by the U.S. Marine Mammal Protection and Endangered Species Acts
Etienne Benson (Vol. 42, No. 1, February 2012)
The Marine Mammal Protection Act and the Endangered Species Act have been cornerstones of federal wildlife conservation policy in the United States since their enactment in the early 1970s. Although there was relatively little controversy over the need for or nature of these permit procedures during the debates leading up to the enactment of the laws, they became the source of concern on the part of many zoologists, biologists, and ecologists as soon as federal agencies began to implement them.

The Business of Natural History: Charles Aiken, Colorado Ornithology, and the Role of the Professional Collector
Steve Ruskin (Vol. 45, No. 3, June 2015)
Charles Aiken was a Colorado ornithologist and specimen dealer whose career spanned almost sixty years, roughly 1870–1930. He was an entrepreneurial naturalist who operated a long-running commercial natural history dealership in Colorado Springs, which enabled him to pursue his passion for birds and make important contributions to American ornithology.

Is it time to re-discover remittances?
A Different Kind of Broken Windows Theory

Elementa: Science of the Anthropocene Call for Papers: Ecology