By Laura Schiavo, contributing author featured in The Public Historian 38.4

This guest post is published in advance of a forthcoming special issue on the National Park Service published by The Public Historian. The full article will appear in TPH 38.4 (November 2016). Sign up here for an email alert when the special issue becomes available.

Last summer, an opinion piece in The New York Times asked, “Why Are Our Parks So White?” The lede introduced readers to a 58-year-old African American woman living in Seattle, in view of Mt. Rainier, who steers clear of the associated park for fear of what she knows she will find: “mosquitoes, which she hates, and bears, cougars and wolves, which she fears.” This is, of course, far from the first time the title question has been asked. For decades now, external critics, and the Park Service itself, have expressed repeated, and repetitive, concerns about the lack of diversity among visitors to Park Service units. This statistic, first noted in a 1962 congressional report about Americans’ engagement with outdoor recreation, has experienced a resurgence of attention in the media fueled by Park Service surveys conducted in 2000 and then again in 2009. The more recent survey found that those US residents who could name a unit of the National Park Service they had visited in the two years prior to the survey, “were disproportionately white and non-Hispanic.” As the National Park Service (NPS) approached its 2016 Centennial, articles lamented the failure of the Park Service to engage a diverse public, even given the outreach to communities of color associated with the anniversary. (See here.) This failure to connect with “nonwhite communities” is figured, in a similar article, as a threat to the Park Service’s “own long-term sustainability.”

My article, forthcoming in the November issue of The Public Historian (38.4), explores this prevailing narrative – that people of color do not visit parks “enough”– and argues that it is both reductive in its implications about what it means to visit the parks, and in its construction of race, including whiteness. The desire for a visiting population that better reflects the nation’s racial demographics is surely driven in large part by the admirable value that everyone benefit equally the “scenery and the natural and historic objects and the wild life therein” conserved by the directives of the Organic Act of 1916 that established the National Park Service. However, there are consequences to this logic that have not been carefully scrutinized. My paper looks at the argument’s embedded narratives, including the reduction of an appreciation for nature with park visitation and the implication that people of color do not share a concern for the environment. It analyzes the presumed link between park visitation and national belonging, and thus a threatened democracy in the face of unequal attendance. “A democracy can’t flourish without the participation of all of our citizens, yet some people from diverse backgrounds may not feel welcome in the parks,” according to a July 2015 Houston Chronicle article.

Such a logic harkens back to Frederick Jackson Turner’s attribution of the “vital forces” that fed the American character to an engagement with the “wilderness.”   Indeed, in 1916, when the Park Service was founded, it had been less than twenty-five years since Turner had delivered his frontier thesis. The Park Service retroactively incorporated national parks and monuments (including Yellowstone, Sequoia, Yosemite, and Mount Rainier) already cherished for their majesty and beauty and already integrated into the national imaginary. Certainly, the conventional understanding of the relationship between landscape and the forging of an American identity was foremost in the minds of the men who created a model for setting aside the most pristine places not only for protection but for communion and rejuvenation. In many ways, then, the cultural logic that defined the National Park Service a century ago was a product of its historical moment, when white men became Americans at civilization’s edge.

One hundred years later, our understanding of the relationship between nature, history, and nation is arguably more complicated. Decades of scholarship have documented the variety of encounters and events significant to the nation’s history. The environmental movement of the twenty first century includes a significant global (expanded from a purely national) orientation. Demographically, we are less homogenous and more urban, and scientists and social scientists are more engaged with the urban landscape and with a widened scope of environmental protection and sustainable practices (that might not include a cross-country car ride to Yosemite!) And yet to hear some who speak for the National Park Service tell it, Turner’s thesis is alive and well: “we” are all inherently products of a “frontier experience,” and the park provides “an opportunity to go home.” My paper suggests that we look more carefully at arguments about race, inclusion, and diversity in the park system, so that rather than relying on the tropes of a century past we might engage with an altered landscape and a new century in ways more attune to all we know about race, identity, access, history, land, and national belonging.

Laura Schiavo teaches museum history and theory and collections management in the Museum Studies Program at The George Washington University. Her two current research projects look at the historic roots of U.S. museums and civic engagement, and the concept of inclusivity and diversity in the National Park Service. Schiavo has years of experience as a curator at the National Building Museum, City Museum of Washington, DC, and the Jewish Historical Society of Greater Washington.

Masculine Compromise: Migration, Family, and Gender in China
New research from Collabra: Why are we so afraid to leave children unsupervised? 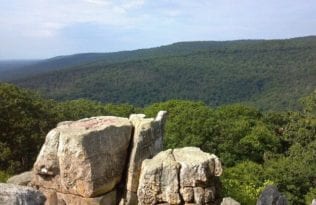 More than Bunnies and Battlefields: The Evolution of Social Policy in the National Park Service