This guest post is published during the American Sociological Association conference in Seattle. Check back every week for new posts through the end of the conference on August 23rd. This year’s ASA theme, “Rethinking Social Movements,” asks us to consider the extent to which social movements can create real change in lived experiences.

As a sociologist who studies school discipline, this is a question I have been asking myself a great deal lately. Over the past few years, sociologists, other scholars, and policy-makers have begun to realize the harm being done by over-policing and excessive use of punishments in schools. Students today are subjected to rigorous policing and are at greater risk of harsh punishment, usually for very minor misbehaviors such as defiance of school authority (e.g., talking back to a teacher, cursing, etc.). Students who are suspended are at increased risk of several problems, including academic failure, dropping out, arrest, incarceration, and unemployment. These harms are disproportionately felt by students of color, which exacerbates racial inequality. Many methodologically rigorous studies find race/ethnicity to be an important predictor of school punishment, even when controlling for student behavior.

In The Real School Safety Problem, I illustrate broader and longer-term harms that come from contemporary school punishment. Excessive school punishment harms families, and it suppresses future civic engagement among formerly suspended students. Students in schools with unfair school rules have higher bullying victimization rates. And we spend a great deal of money on school security and punishment; these funds could be returned to students or communities rather than being spent on ineffective, harmful practices.

Thankfully, in the past 3 or so years, many school districts, cities, and some states across the U.S. have recognized some of these problems and have introduced new policies that seek to reduce school suspensions. The Federal Government has encouraged these alternatives to school suspension, provided guidance on evidence-based responses to student misbehavior, and investigated racial disproportionality in punishment through the Department of Education’s Office of Civil Rights. The movement away from excessive school punishment seems to have begun.

Yet I am skeptical of the power these policy revisions have to result in real change that benefits all students. Data released recently by the Department of Education show that suspensions did decrease substantially from 2011-2012 to 2013-2014 – but racial disproportionality in school suspensions increased. Harmful practices might have decreased overall, but in a way that only exacerbates racial inequality, a primary harm of school punishment.

The real school safety problem – harshness of punishments and over-policing of students – is deeply institutionalized. It is based on intransigent problems such as school segregation, implicit racial bias, antagonism between teachers and students, excessive pressures on teachers and school administrators, and shared sensibilities about punishment. None of these problems goes away when a city council or state legislator one day requires schools to practice restorative justice or other strategies rather than suspending someone. In fact, they might make it worse, since new requirements placed on teachers without proper training or resources simply adds a new demand to members of an already overburdened workforce. Policy changes do not alter school climates, address racial bias, or provide new training for school staff. They do nothing to alter punitive sentiments or rethink how school staff perceive and interact with students. How can we expect them to result in real change that benefits all students?

Aaron Kupchik is Professor of Sociology and Criminal Justice at the University of Delaware. His previous books includeHomeroom Security: School Discipline in an Age of Fear, Judging Juveniles: Prosecuting Adolescents in Adult and Juvenile Courts, and Criminal Courts. 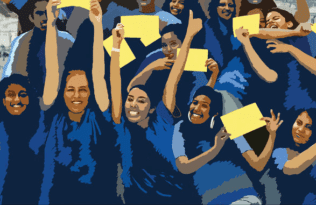