by Adam B. Seligman, author of Living With Difference

Christmas Day, which in 2015 was also a Friday and the birthday of the Prophet Muhammad to boot, found me at the Jingjue Mosque in central Nanjing, a city of 8 million inhabitants with a Muslim population of about 100,000. There were about 900 people in attendance filling the mosque and the surrounding courtyards, which stretched out on both sides of the mosque and in front of it. What struck me right away was the great range of the congregants’ backgrounds: Han Chinese (converts to Islam), Uighurs from Xianjiang Province, Indonesians, Pakistanis, Central Asians, Indonesians, Arabs, North Africans, Africans from both East and West Africa, as well as Caucasians. There were students and old folk, men dressed in jeans and flowing robes, some with hip­ hop hats and Uzbek (and Kyrgyz) headgear, some bearded and others clean­ shaven (and everything in between, as befits some stylish young trends), some with socks and many without–all despite the thermometer being in the low 40s. New migrants from the northwest of the country added to the existing Muslim presence, now sadly depleted—only four mosques are left in a city where there were once dozens. What I noticed next was the diversity within unity, the distinct and palpable individuality and uniqueness of each and every man bent in prayer. A religion that emphasizes practice, rather than belief alone, allows for, even requires, a fractile field of differences; people do not hold their hands in exactly the same position, maintain the self­same posture, or prostrate themselves in an identical manner, even if they are all striving for exactly the same prescribed positions.

I was suddenly reminded of a colleague, an expert on religion in Europe, who once remarked that in his view Islam is a religion inherently hostile to individualism, because Muslims pray “all bunched up together, not like people in a church or synagogue.” His comment seems to me to represent, in the kindest of readings, a strictly secular and perhaps sociological perspective, which sees and possibly structures reality for one lense only: the observer looking in from outside. Yet from the perspective of the believers, the men and women actually praying in that space, of course they are individuals—how else should they approach God? The view from outside looking in, especially the view trained in one reality and one way of looking at the world, by its nature imposes a certain unity, if not homogeneity, on what it finds strange and unsettling. Those gathered for Friday prayer do not in fact lack individuality; rather, the Western, Christian, and post-­Christian eyes are just not trained to see it. To make sense out of what we find both foreign and, especially in these times, threatening, we lose “granularity”–we lose the specifics. We abstract, generalize, lump together, and homogenize—and in the process we see not individuals, but only an undifferentiated mass. But what we see is not necessarily the reality.

During my stay I spent a good deal of time in different mosques, and meeting with different Muslim communities and individuals in and around Nanjing. I was visiting China to explore setting up a summer school on how to live with religious and ethnic difference, based on the blueprint developed by CEDAR. For a while now, China has been experiencing massive population transfers, generally from the north and west to the southeast. These economic migrants face prejudice and social ostracism, as their very presence challenges established boundaries of community, religious practice, and ethnic identity. Engaging with difference is therefore an important mandate, in today’s China as in many other parts of the world.

China today is also struggling with its policies and often outdated laws affecting Muslims and adherents of other religions among its citizens. Should group prayer on university campuses be permitted? Who can be a prayer leader? Where may donations to religious organizations originate? The government seems to be searching for a manageable, middle­-of-­the-­road policy that would allow religious expression, without also opening the floodgates of religious and ethnic separatism —all the while, to be sure, taking care not to do anything that will lead to a greater sense of disenfranchisement and grievance. As in so many other places in the world, policymakers—indeed, all of us—are having to learn to see the world a bit differently and shift our focus as we view the other and the unfamiliar.

As for myself, at the end of Juma I joined the congregants at lunch, forgoing the meat soup and eating only hard­-boiled eggs and bread. And outside the mosque I bought some wonderful sweet rolls for my own Shabbat, which began at sundown that evening.

Adam B. Seligman is Director of CEDAR and Professor of Religion at Boston University. 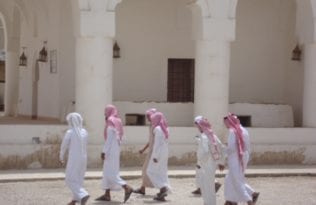 An Author’s Travels through Saudi Arabia