by Ruben Andersson, author of Illegality, Inc.: Clandestine Migration and the Business of Bordering Europe

Amid Brexit hysteria, the academic temptation may be to hide behind the ‘expert’ mask so derided by the nasty Leave campaign. But besides their dismissiveness, there’s a bigger problem looming for UK-based scholars: our deep personal involvement. As an ‘EU migrant’ studying migration, I’m also caught up in the free fall of Brexit – comically depicted by the New Yorker in the shape of John Cleese silly-walking off the white cliffs of Dover, yet frightening all the same as the world around seems consumed in panic. 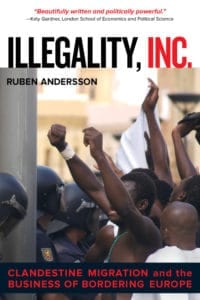 Instead of offering ‘expert analysis’ on migration, then, I’d rather write about the emotional charge of this political moment. Let’s start with anger: at the prime minister and his selfish, simplistic referendum; at the mendacity of Brexiteer politicians now covering their tracks; and at UK newspapers that have spouted hatred of migrants and Europe for years only now to cash in on the turmoil. Next follows a rather continental Schadenfreude. Gloat at the dimwits! Look what you just did! However, chuckling at the madness on Twitter does not protect against another emotion – anxiety, roiled into fear. Which other countries may jump off the cliff towards the 1930s-style mayhem on the rocks below? And where do I stand in this migrant-bashing season as a white northern European? The Murdoch-owned Sun publishes pictures of East European shops while Polish migrants are attacked and called ‘vermin’; research colleagues receive hate mail while ‘foreign-looking’ people are abused in the street. Meanwhile, employers (including my own) assure ‘non-UK staff’ that they remain valued. I have lived in London longer than I care to remember yet never before have I felt that invisible line drawn between my colleagues and myself. A chill wind sets in – this is visceral and real in a way that I until now have experienced vicariously, through the undocumented African migrants among whom I have worked.

This emotional dislocation mirrors that of my enfranchised neighbours. Set aside the racism fanned by the media and politicians, and it is clear that both sides’ anger, gloating, anxiety and fear keep feeding off one another. One Twitter meme reads: ‘Of course foreigners steal your job. But maybe if someone without contacts, money, or speaking the language steals your job, you’re shit.’ In this callous rejection, repeated everyday in myriad forms in class-divided Britain, fear can easily be whipped into hatred.

Yet as we’re all buffeted by political emotions, social science remains curiously underinvested in exploring them. This includes ‘migration studies’, where academics including myself often veer towards the bigger picture, assuaging fear by numbers or offering detailed critiques of migration policy. This is all fine, but we also need a broader lens. Not in the least, we need to craft a better ethnographic understanding of how anger, anxiety, fear and hatred blow through communities, of who fans the flames and who reaps the whirlwind. We need deeper analyses of how destructive emotions globalise and propagate, and how they attach to objects and people: be they refugees, borders, ‘EU migrants’ or Brexiteers stepping over that sheer cliff into the unknown.

101st Anniversary of the Armenian Genocide
Living With Difference