This is the third of four daily recaps by Matthew Delmont, author of Making Roots: A Nation Captivated (coming August 2016) about the remake of Alex Haley’s Roots television miniseries airing on HISTORY Channel. If you have not seen the first three episodes yet, you may be spoiled.

The acting in the new Roots series has been tremendous, and it was especially good last night. The third episode, in which Anika Noni Rose plays the adult Kizzy, picks up the story in 1816, nearly two decades after Kizzy gave birth to a baby that was produced after she was raped by her master. At the start of the episode Tom Lea (Jonathan Rhys Meyers) is raping Kizzy again. This is a starting way to open the episode, but it makes it clear that sexual violence was an inescapable part of life for Kizzy and many enslaved women. Narrative time has passed between the two episodes and it is horrifying to imagine what Kizzy endured in these years. When Tom finishes and leaves, Kizzy prepares to go to work. This is a subtle scene and the details of Kizzy washing her body, rinsing her mouth, and steadying herself hint at what daily survival looks like for this character.

Much of the episode focuses on the relationship between Kizzy’s son, Chicken George (Regé-Jean Page), and his father and owner, Tom Lea. Chicken George gains Tom’s admiration when he becomes a skilled trainer of gamecocks. Regé-Jean Page and Jonathan Rhys Meyers play off each other well, and this plotline explores family and ancestry from a different angle. If passing the family story from Kunta Kinta to Kizzy was about maintaining a sense of continuity between Africa and America, passing the family story from Kizzy to Chicken George requires acknowledging that ancestry also contains elements of violence. 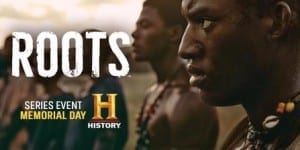 Alex Haley was fascinated by cockfighting, so I think he would have loved this episode. I was less enthralled by the cockfighting scenes (of which there are several), but I appreciate how this episode uses cockfighting as Chicken George’s path to freedom. After his bird wins a climatic fight, it looks like George has won his freedom. This moment of joy quickly evaporates, however, when the English cockfighting rival calls for a rematch and produces a larger bird that kills George’s bird and with it his chance of freedom. After losing, George is forced to go to England to work as a slave for man whose bird won the cockfight. The scene is ludicrous, especially since slavery was illegal in England by 1830s when this scene is set, but it speaks to how precarious freedom and the hope of freedom was for enslaved people.

There are powerful scenes between Chicken George and Kizzy, but too few of them. In one, Kizzy tells George that she almost drowned herself and him as a baby, and in another, Kizzy helps George perform the naming ceremony for his son. Overall, this episode felt rushed (there is, for example, a brief scene regarding Nat Turner’s Rebellion). I wished there was more time to explore this relationship between Chicken George and Kizzy. Or maybe I just wanted to see two amazing actors, Anika Noni Rose and Regé-Jean Page, share more scenes. Looking forward to the final episode on Thursday night!

Roots: The Groundbreaking Series Reimagined Recap, Episode 2
In Sight but Out of Reach: Security and Surveillance Technologies in Mexico