To celebrate the 2016 annual conference for the Society for Cinema & Media Studies, which kicks off tomorrow in Atlanta, we are pleased to offer a collection of limited-time free articles from Film Quarterly and Feminist Media Histories that together honor “Women in Cinema & Media.” Enjoy free access to these articles today through the end of the meeting on April 3, and be sure to meet the editors if you are attending the conference! 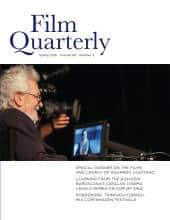 Giving Credit to Paratexts and Parafeminism in Top of the Lake and Orange Is the New Black (Kathleen A. McHugh)

The Vulnerable Spectator: Minnie and Me and the Living Girls (Amelie Hastie)

The Crime Risk Kaleidoscope
Coming in 2017: Studies in Late Antiquity, the newest journal from UC Press