Immigration has been a key issue in the 2016 presidential elections. In Making Los Angeles Home: The Integration of Mexican Immigrants in the United States  authors Rafael Alarcon, Luis Escala, and Olga Odgers shed light on the different facets (economic, social, cultural, political) of an immigrant’s integration process. 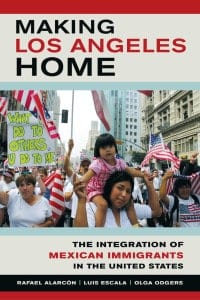 Our Zacatecan interviewees who arrived in Los Angeles in the 1960s and 1970s were mostly undocumented. Although they entered a solid regional economy supported by a manufacturing base that offered plentiful permanent, well-paid, unionized jobs, the interviewees’ first jobs tended to be in worse-paid occupations with poor working conditions. …

Among women finding jobs in canneries processing fruits and other foodstuffs, Marcia worked in a fish-canning plant for more than three decades. But it was not easy for her to get this job in 1966: ‘I went every day with my husband, at four in the morning, to a room where everyone who wanted to work had to sit and wait . . . until we got work, and then we stayed put where we got it . . . we spent thirty-six years working there. My husband died and I kept on working to keep going. . . . When I left, in 2001, I was making $6.75 an hour. We never got ahead in there.’

Marcia is a US citizen, never was undocumented, and is now collecting retirement income.

As the Zacatecan interviewees began to acquire work experience, learn English, make employer contacts, and regularize their immigration status, it was found that those who became naturalized citizens or legal permanent residents were achieving relative occupational mobility at a higher percentage.

Among the business owners, Rafaela stands out. She arrived in Los Angeles in 1988, is a naturalized citizen, and is married with children born in the United States. In Zacatecas she was a cosmetologist and, although she didn’t want to keep working in this field, she needed to do so and later became the owner of a beauty salon: “I never really liked cosmetology. I did it because my mother told me I had to learn a trade. In Los Angeles, I wanted to work as something else, but talking with other women in laundromats and with my neighbors, they told me they were making $3.75 an hour. I said, I’m not working for $3.75, no way . . . some of them worked in restaurants, others in factories, one woman packed candles, another one sewed in a clothing factory where they paid her five cents per piece . . . my husband made $3.75 an hour too, which was the minimum wage in those days.”

Rafaela tells how she found her first job: “I saw a beauty parlor with a sign that said ‘se habla español,’ so I went in and told the owner—a Salvadoran, twenty-one years old—I was a cosmetologist in Mexico and I wanted to work. ‘I’ve got five years’ experience,’ I said.” During the interview the owner asked Rafaela to cut the hair of three young men from Jalisco, and her work was good enough to get her hired right away. “That was Thursday, and by Sunday I had $70 in tips and $430 in pay because I got 60 percent of what I took in.” In 2008, twenty years after her arrival in Los Angeles, she owned a salon and had four employees.

Learn more about how other Mexican American immigrant women have made Los Angeles their home in Making Los Angeles Home: The Integration of Mexican Immigrants in the United States available now.