By Lesley J. Pruitt, author of The Women in Blue Helmets: Gender, Policing, and the UN’s First All-Female Peacekeeping Unit 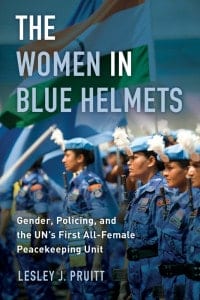 This guest post is published as part of a series in relation to the Academy of Criminal Justice Sciences conference occurring at the end of March in Denver, CO, and in recognition of International Women’s Day and Women’s History Month.

Just recently, the final contingent of the world’s first all-female formed police unit (FFPU) deployed in UN  peacekeeping departed Liberia for the last time—representing nearly a decade of Indian women’s contributions to building the peace in Liberia. President Ellen Johnson Sirleaf of Liberia commended them, saying, “The contribution you have made in inspiring Liberian women, imparting in them the spirit of professionalism and encouraging them to join operations that protect the nation; for that we will always be grateful.”

Moreover, Sirleaf added, “Our security service now has 17 percent women – we owe all that to you, because it was not even one percent a few years ago. And these women want to emulate you in the way you’ve served this country.” Indeed, President Sirleaf said if it were up to her, they wouldn’t be leaving: “If I had my will, I would have recommended for another unit of the United Nations Mission in Liberia to leave, so that the Indian Formed Police Unit would continue its stay in the country for the time being.”

While these particular remarks come at the end of their term in Liberia, such praise is nothing new for the FFPU. When the Indian FFPU first deployed to Liberia in January 2007, Indian media declared that, “the Ladies from India Have Landed in Liberia,” and hailed the initiative, declaring the “Battalion a Hit in Liberia.” That first contingent consisted of 105 women peacekeepers recruited from across India’s Central Reserve Police Force (CRPF), a paramilitary police organization. The first group was deemed a success by the UN and media reports, and a rotation system was put in place so that the contingent was replaced annually up until their recent departure.

Indeed, the very first FFPU commander, Seema Dhundia, back in 2007 predicted such positive outcomes for her team, saying, “These girls are experienced and have been trained. They have worked in areas of India where there was insurgency. They will do a good job and the Liberian ladies will get motivated and inspired to come forward and join the regular police.” Facing challenges from riots to Ebola, the FFPU officers have proven themselves up to the task again and again. Indeed, UN Secretary General Ban-Ki Moon commended the FFPU as their term recently ended, highlighting that, “Through their work, they managed criminality, deterred sexual and gender-based violence and helped rebuild safety and confidence among the population.”

Given these outcomes, it is critical to understand how this innovative initiative came about, what made it possible, and what outcomes have been achieved—for the people of Liberia, for the women of the FFPU, and for the world more broadly.

In my own fieldwork in New York (USA), New Delhi (India), and Monrovia (Liberia), I was able to develop an understanding of the actual and possible benefits and challenges to women’s participation in peacekeeping. These benefits and challenges affect the women peacekeepers themselves, the local populations where they serve, and the home communities to which they return after deployment. Through examining the ways women and men working in a variety of contexts found practical ways to achieve this innovative peacekeeping practice and advance gender equity despite obstacles, I came to a deeper understanding of questions we need to be urgently asking about the relationship between gender, peace, and security more broadly.

In an interview recounting some opposition to the original FFPU deployment, Mark Kroeker, former Civilian Police Advisor of UNPOL, UN DPKO, explained that, “I think when the discussion was there and the idea of the FFPU emerged the question was can the Indian government actually produce it? Do they have the right equipment, qualifications, and is the mission willing to have them? …The questions started coming: Are you sure an all-woman unit is really appropriate?” In hindsight one might argue that not only was the FFPU appropriate, it was sorely needed.

For now, this case clearly shows that significant and innovative changes can happen, even within the confines of conservative institutions beholden to a variety of stakeholders, not all of whom support women’s participation in peace and security. Moreover, while there are still many impediments to adequately implementing gender perspectives in peacekeeping, it nevertheless appears that the situation now is riper for change than it ever has been. In the words of Indian author and activist Arundhati Roy, “Another world is not only possible. She is on her way. On a quiet day, I can hear her breathing.”

Lesley J. Pruitt is a lecturer in international development at RMIT University in Melbourne, Australia.