Have you ever wondered what someone else was thinking about at a certain point in time? Thanks to Mark Twain’s dictation style for his extraordinary Autobiography, we know that on this day in 1907, the subject of Andrew Carnegie is what struck his fancy. 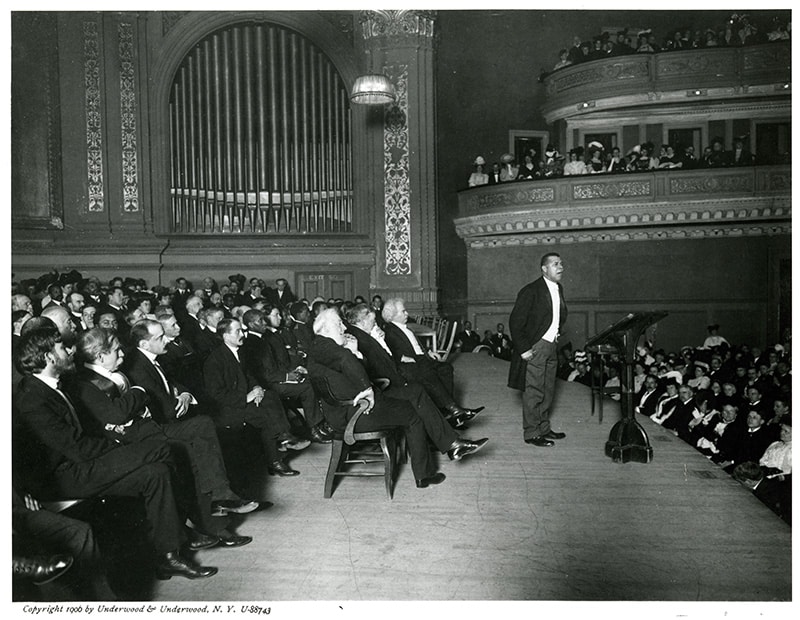 Dinner to Mr. Carnegie given by the Associated Societies of Engineers—The speeches, and Mr. Clemens’s remarks about Carnegie’s Simplified Spelling.

I have been leading a quiet and wholesome life now during two entire banqueteering, speech-making seasons. These seasons begin in September and last until the end of April; it is half a year. Banquets run late, and by the end of the season the habitual banqueteer is haggard and worn, facially, and drowsy in his mind and weak on his legs. Three seasons ago I was still keeping up the banqueteering habit—a habit which had its beginning in 1869 or ’70 and had been continued season by season, thereafter, over that long stretch of thirty-five or thirty-six years. I renounced that habit on the 29th of April, three seasons ago. I had been banqueteering and making speeches two or three times in every week for six months; I had tried to get out of this soul-wearing slavery every year for a long time, but had failed of my desire through the adoption of a mistaken system—the system of tapering off, used by hard drinkers. I said I would limit myself to three banquets in the season. This was naturally a mistake, for when a weak person has said yes once he hasn’t grit enough to say no the rest of the time—but I adopted a better policy on that 29th of April just referred to; I took what may be called the teetotaler’s pledge, and said I would not attend speech-making banquets any more. That pledge has saved me, and has given me a quiet and peaceful life; I think I have not broken it more than three times since I made it.

I broke it last night, and am not at all likely to break it again for a twelvemonth. I had good reasons for breaking it last night—I wanted to see some more of Andrew Carnegie, who is always a subject of intense interest for me. I like him; I am ashamed of him; and it is a delight to me to be where he is if he has new material on which to work his vanities where they will show him off as with a lime-light. The banquet last night was given him by the Associated Societies of Engineers, a wonderful organization with a membership of fifteen thousand engineers of all sorts and kinds, an organization whose industries cover every department of that extraordinary trade; that trade which by help of the inventor, has created the marvel of the ages—this modern material civilization of ours. Two hundred and fifty members were present, and not an unintellectual face visible anywhere—a most remarkable body of men to look at. The oldest member present, Mr. Fritz, aged eighty-six, hale and hearty, was the revolutionizer of the steel industries of the United States—a small affair when he took hold of it with Mr. Holley, but now vast almost beyond the power of figures to compute. Edison was there, looking young and plump; and there were others of high distinction present. The dinner was in honor of Mr. Carnegie, who had given to the Associated Societies their great building and the land it stands upon in 39th street, a present which cost his pocket-book twelve hundred thousand dollars.

I wonder what the banquet will be a century from now. If it has not greatly improved by that time it ought to be abolished. It is a dreadful ordeal, and in my long experience it has shown not a shade of improvement; I believe it is even worse now than it was a generation ago.

He goes on to describe Carnegie’s remarks, share his own speech, and more, but to read the entire thing you will need a copy of the Autobiography of Mark Twain, Volume 3 itself. (See pages 190–193) 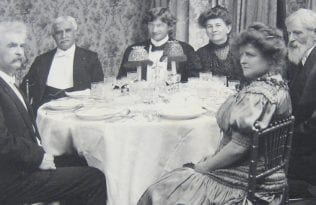 In honor of Mark Twain’s birthday 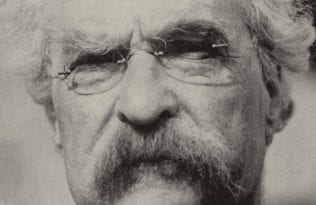