By Claire Snell-Rood, author of No One Will Let Her Live: Women’s Struggle for Well-Being in a Delhi Slum 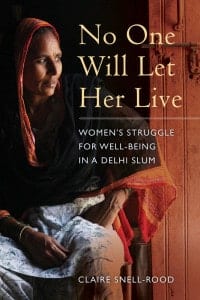 As a white American woman doing research in a slum community, I had anticipated that people would be skeptical of me. Of the white people who showed up in this particular industrial slum, many were affiliated with area NGOs; others were foreign journalists obligated to take pictures of dilapidated homes. For the initial months of my research, many women responded to my questions as if on auto-pilot, having anticipated what I would ask based on what others had before. They knew what white people wanted to know. After the slum was demolished partway through my fieldwork, I followed families to their new homes in neighboring low-income neighborhoods. I was surprised how close I became to families during this period, but even more, the way that families joked about what we held in common even though to me our class differences were even further entrenched by their increased insecurity.

In particular, my field assistant, Saraswati, sometimes joked that we could have similarities that made us more alike than she to her new neighbors. As we sat out on her stoop one day, Saraswati nodded toward her neighbor joining us, and, with an air of exposé, said that her neighbor was rich. Because her husband had a vegetable stand, she explained, they could eat whatever they wanted! Her neighbor just laughed and then pointed out that Saraswati’s and my bodies had become similar after many months spent together, with me eating lunch at her house. “Look at Saraswati’s family,” the neighbor advised me, with Saraswati chuckling alongside. “They are so dried out”—sukha sukha, another way of saying skinny—“no wonder you look the same if you eat at their house!” Saraswati laughed in agreement and added, “and she eats so much fruit!”

I was hesitant to make such comparisons, knowing that my height towered at least six inches over Saraswati’s, and that I returned daily to a home with full meals and much fruit, a food considered a luxury and boon to health. Through jest, Saraswati and many of the other women to whom I became close dealt with similarity and difference at the same time. They drew attention to the fact that we came from different backgrounds– clothes, money, desires, and traditions—but that our engagement could be real.

What implications does your research have for policy and future research related to health in urban slums?

In terms of policy, this research indicates the importance of policy-makers and interventionists being savvy about the social dynamics that structure women’s health decisions. First, community-based participatory change and advocacy are vital to social change in poor communities. Yet these can’t be the only mechanisms of change that outsiders count on. In many communities, the risks inherent in taking part in collective action are too big. Interventionists must be aware that as vulnerable as women living in slums are, they reason their decisions based on long-term family and personal security, which may have different results than community-based change. Second, in recent years, women’s collectives have become a common vehicle for NGOs to promote pooling of finances and community-based dispute resolution for married couples. Guided by the premise that vulnerable women are best positioned to understand needs within low-income communities, such initiatives also seek to empower the women participating, and in so doing, improve community capacity to address complex problems more broadly. However, my research shows that in slum communities characterized by immense diversity and inequality, interventionists must be aware of the potential for these groups to inadvertently re-instantiate local power dynamics. Therefore, women’s collectives must include steps to safeguard against the abuse of power and protect the anonymity of local women who may seek their help.

People who live in slums are deeply familiar with researchers—as well as the agendas of researchers, which are often focused on their health risks, poor conditions of their living environment, and poverty. Yet beyond the structure of risk-focused surveys, many residents of slums have deep philosophical reflections on their lives—their journeys of migration, hopes for transformation, and the immense social changes that they have experienced in moving to drastically different places during their lives. For the diverse people who live in neighborhoods classified as slums, quantitative research methods play a vital role in capturing the breadth of challenges people face and charting patterns between people and communities. Yet surveys would be well served by including questions that focus on community assets as well as the obvious health deficits. Further, longitudinal research demonstrates that women face multiple family transitions—divorce, secondary marriage, shared parenting, estrangement—that are extremely difficult to report to close associates, let alone itinerant researchers. Yet these under-reported family breaks hold deep significance for women’s overall security, and health behaviors. Innovative methods that ask women to estimate community incidence of family size and kinship practices may be an alternate way for researchers to explore these dynamics without compromising women’s desire for confidentiality.

Are there any misconceptions about the women and families you studies do you most wish to dispel?

Across the websites of NGOs, the funding priorities of international development organizations, and media stories on poor Indian women, the prevailing image of Indian women has them hiding shyly behind their pallus, the end of their saris. In combination with dismal health statistics that show higher levels of malnutrition, poor reproductive health, and domestic violence for Indian women living in slums, this image leaves little room for acknowledging that there is a voice on the other side of the pallu. Because the overwhelming emphasis has been on what is done to women, there has been little question about what exploring women’s perspectives could contribute. Further, the emphasis on the low educational status of women living in slums inadvertently produces the sense that women don’t know what’s good for them. The women with whom I did my research repeatedly communicated to me how much more they have to say than their initial silence in public settings conveys! These women and families are not shy, much less without complex reasoning about their beliefs and health practices. The key is to ensure that women are provided with a forum that allows for prolonged reflection.

Claire Snell-Rood is an assistant professor in behavioral science at the University of Kentucky.