By Aldo Civico, author of The Para-State: An Ethnography of Colombia’s Death Squads 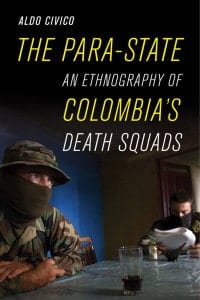 My first encounter with a paramilitary leader was with Doble Cero. Before meeting him, I had spent my summer in 2003 to collect the testimonies of survivors of a massacre in a town near Medellin. One morning, Doble Cero’s men had penetrated that town and randomly killed several innocent women and men. When I told a journalist that I wanted to understand the need for such spectacular violence, he offered to make contact for me with Doble Cero and I accepted. We spent a day together in the mountains where he was hiding. The encounter shifted the focus of my interest from the victims to the victimizers. At the time, my fieldwork was made possible by the fact that the paramilitary had announced their demobilization and this made it safer for me to access the areas under they control.

I believe I was able to gain their trust because I have been always very transparent about the motives and the objects of my research, and because I was just willing to listen to them for hours. I discovered that these people in their lives had rarely found someone genuinely interested in their life experience and be ready to listen to them. For some of them, sharing their experience with me proved to be cathartic. Including for Doble Cero who, as I tell in my book, was killed after a few months we first met, and while he was sharing his life history with me.

From your research, why do you think some countries have paramilitary groups rather than promote the creation of new political parties to initiate change?

From my observation in Colombia, paramilitary groups were formed not to fight for change, but quite the contrary: to maintain the status quo. They were created by an alliance (what in the book I call an intertwinement) between cattle ranchers, multinational corporations, the military, drug lords and the state in order to repress any dissident voice. These are forces that operate in marginal areas of the state, in spaces of exception that are produced as untamed and where law is suspended. In regions across Colombia, the paramilitaries became the private army of an emerging regional elites, who purposely used them to increase and consolidate their political and economic power. The paramilitary represented a political project.

Thus, the fight against the armed insurgency became the justificatory discourse that enabled the formation and the consolidation of a political project that has been quite successful in Colombia.

I started my career a long time ago, in the anti-mafia social movement in Italy. I lived several years in Palermo, in very complicated and painful years, when prosecutors were killed with car bombs. One of the surprises in doing fieldwork in Colombia was the comparison that emerged between the “Cosa Nostra” and the paramilitaries. Both organizations are at the same time inside and outside the state; against and in favor of the state. They are both an articulation of legal and illegal powers. In fact, the intertwinement between organized crime and the state is immanent to the Mafia and the paramilitary phenomena. It’s the defining characteristic. This not only brought me to think about the nature of the paramilitaries and of the Italian Mafia, but also to wonder about the essence of the State that seems not to have problems to ally with war lords and with organized crime in areas that it produces as unruly. And this, of course, doesn’t apply only to Colombia or to Sicily.

Aldo Civico is Assistant Professor in the Department of Sociology and Anthropology at Rutgers University. Between 2005 and 2008, he facilitated ceasefire talks between the government of Colombia and the guerrillas of the National Liberation Army (ELN). 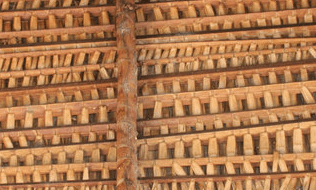