By Joshua O. Reno, author of Waste Away: Working and Living with a North American Landfill 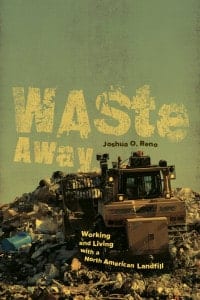 What initially drew you to studying waste management and waste workers?

The activity of wasting is as routine a part of everyday life as are eating and speaking, yet has attracted considerably less anthropological attention—when it has, moreover, it is typically considered subsidiary to these other activities (the taboo leftover that is considered inedible, the ambiguous phenomenon that is difficult to represent…). Following structural and symbolic approaches to “dirt,” more focus has gone toward what we choose to categorize as filthy or unnecessary, and very little toward what becomes of it after we do.

Waste management interested me as a novel way to explore this topic, especially in the context of North America, given the sheer amount of waste produced and the controversy surrounding the preferred method of disposal: sanitary landfill. As with other types of infrastructure, the critical role of waste management in shaping our lives only becomes apparent when it is functioning poorly. I was drawn to study waste workers because of their access “behind the scenes” to the hidden world of waste management upon which the rest of us depend. I wanted to research waste workers whose task it was to make our waste (and the labor they do with it on our behalf) invisible.

As with other types of corporate enterprise, the privatization of waste disposal in North America helped to create a translocal market, which has disconnected waste producers even further from the people and places that manage their discards. While there is growing awareness of the shipment of toxic waste from wealthier to poorer countries, people outside Michigan are typically unaware of the decade-long burial of Canadian waste in privately owned Michigan landfills. I wanted to research waste activists who sought to challenge Canadian waste imports and politicize the shipment of waste away that most of us take for granted.

Did you encounter any unique challenges while conducting research and interviews?

For my research, I worked as a laborer or “paper picker” at a large mega-landfill on the outskirts of Detroit, Michigan. Afterword, I associated with local activists who were demonstrating against pollution from the landfill site and its controversial Canadian waste contracts. On the one hand, it was a challenge getting used to the labor. I expected it to be physically unpleasant, and it was, but it was also difficult learning how to work with and for others.

A landfill paper picker’s task is an impossible one: to keep the landfill tidy. It was hard to satisfy the demands of the landfill’s managers and regulators, though fulfilling social obligations to coworkers was equally difficult. We always had to be ready to listen to one another gripe, to calibrate our efforts so as not to stand out by working too hard or too little, to tease one another without crossing the line and offending someone’s dignity and pride. I was relieved when I shifted attention to local residents and their demonstrations, but this proved challenging in other ways.

There was an ongoing dispute between the landfill and this helped perpetuate rumors and allegations (on both sides) that I knew to be untrue or unfair. Moreover, the landfill was located on the border between two townships. The more rural, less wealthy, more diverse community where the landfill was located depended upon host fees they received from the site; most of the activists came from the more suburban, whiter, and wealthier community to the east of the landfill, which received none of these benefits, but had to deal with odors and traffic problems. It was quite a challenge to negotiate these different interests and power relations and to present a balanced view of this ongoing and unfinished struggle.

What ideas about our relationship to our waste do you most wish for readers to take away from your book?

We are used to imagining ourselves connected to the fate of industrial producers: everything from Marxian value theory to fair trade campaigns help us, to varying degrees, feel morally accountable for other peoples’ welfare and the possible exploitation they face. When we think of the disposal of a good, rather than its production, we are more often encouraged to imagine ourselves in a relationship with “Nature,” in the abstract, and forget the many people and communities who take our waste away, and work and live with the consequences. This partly has to do with mega-landfills, like the one I studied, because they are designed to disappear into the landscape and be forgotten—by making the things we dispose of swiftly vanish, they distort our relationship to the things we keep (which appear to transcend process and time) and to one another.

Pro-recycling and anti-littering efforts, while laudable, tend to individualize responsibility for waste, rather than help connect us to other people. What I most want readers to take away, therefore, is that waste management infrastructure is a social relationship between us and those exposed to waste products on our behalf. So any discussion of how to reform our collective waste habits should take these other people into account. Similarly, any discussion of disposal technologies, including alternatives to landfill, should consider not only their technical and environmental aspects, but also how they shape our social and moral imaginations.

Unsettled
Elephants in the Music Room: The Future of Quirk Historicism