By Janet McIntosh, author of Unsettled: Denial and Belonging Among White Kenyans 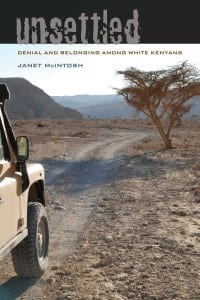 When I was conducting research for an earlier project on Giriama and Swahili of the Kenya coast, a couple of the elderly former settlers I knew would occasionally uncork statements that rocked me back (e.g. “I don’t know how you grub about with those people…”). It was naïve of me, but I was initially startled they were still walking the earth saying such things 40 years after Independence. As I got into the project, I was then surprised to find many more complex shadings—especially among younger white Kenyans, who often struggled to reconcile the disapproval they sometimes felt from Kenyan critics and western scholars with their sense of themselves as good Kenyan nationalists. A few people felt themselves almost cornered by the effects of the colonial legacy on their own psyches. One of my respondents put himself into therapy because he had strong romantic feelings for a Kikuyu woman but couldn’t act on them because, he felt, he had been twisted by colonial racism. Tom Cholomondeley, whom I interviewed in Kamiti Prison during his murder trial, was the ultimate colonialist villain to the Kenyan media, at the same time I found he had been reading Ngugi wa Thiong’o and some highly critical histories of colonialism in his cell. He really had to wrestle with the question of how much guilt to own and how to locate himself in history. Of course I also found some of what you’d neatly predict, but there was immense murk in the white Kenyan subjectivities I encountered.

Did you encounter any unique challenges while conducting research and interviews?

Anthropologists don’t often study the subjectivity of elites; they don’t occupy that “suffering slot” Joel Robbins has aptly identified. It’s easier to caricature elite points of view than to get intimate with them—and it’s methodologically tricky to get intimate with such perspectives (particularly, I think, in living people as opposed to people one encounters in the archives), because as you get to know and sometimes actually like them it can be harder to step outside of the way they see the world. It was hard for me to capture both the ways in which white Kenyans (often) experience themselves as good people with good intentions, including their many affable relationships with Afro-Kenyans, and the ways in which they are often embroiled in all kinds of racial problematics emergent from the colonial order of things. Hard as well to describe how and why they don’t see what they don’t see without sounding smug (I’m an elite white too, after all). From time to time my audience members have self-separated into two camps: “You’re going too easy on these people” and “You’re being too hard on them.”

This work brought me into contact with white Zimbabweans and white South Africans, all in situations unique to their nations, but still with some resonances with white Kenyans. I just gave a talk, actually, about some of the heated and contradictory responses to left-leaning urban white South Africans learning isiXhosa (and promoting themselves as remarkable for learning it). We’ll see what my fieldwork future holds.

Janet McIntosh is Associate Professor of Anthropology at Brandeis University and author of The Edge of Islam: Power, Personhood, and Ethnoreligious Boundaries on the Kenya Coast.

University Press Week 2015: Insights into Who We Are, What We Do
Waste Away