Prior to its Fall 2010 release, the University of California Press was well aware that the first installment of the Autobiography of Mark Twain was going to be a significant publishing event and a strong, steady seller (initial print run: under 5000 copies). Prognosticating it to become a bestseller over time morphed in a few short months into an impending, bona fide blockbuster ‘BESTSELLER’, a status not traditionally bestowed upon a university press book release.

The frenzied interest in Mark Twain’s “100 years repressed” candid recounting of his life and times resulted in an avalanche of coverage across print, online, radio, television, and social media outlets, months prior to and following the book going on sale. Here’s our #UPWeek #ThrowbackThursday account of the singular, truly amazing publishing event that took place five years ago. (#ReadUP!) 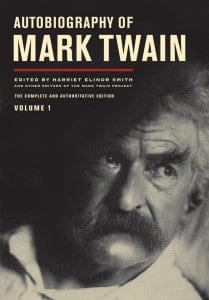 A soft launch of the Autobiography of Mark Twain, Vol. 1 in early 2010 via UC Press’ Twitter feed kicked pre-release promotional efforts off, in order to get audience response to our proposals for what photo to feature on the book’s dust jacket. Through this social media outreach (the book’s release month: November), we solicited constructive feedback and engaged with potential book purchasers at a relatively early stage (search hashtag #MarkTwain and you’ll see what a hugely interested audience exists regarding him!).

In May, having seen mention of the Autobiography on social media, an L.A.- based correspondent for the UK’s The Independent propelled the campaign forward with an interesting (although factually flawed) news story about impending publication. People immediately responded not only to the story of the Mark Twain-imposed 100 year embargo of the book, but also to the idea that there might be shocking and salacious offerings in the Autobiography. 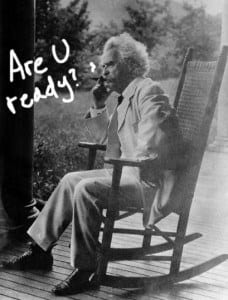 The next big publicity break in July was the airing of a PBS NewsHour segment that featured interviews and footage filmed in the Mark Twain Papers archive, generating a flurry of requests for book galleys and creating a buzz in the blogosphere and Twitter-sphere. Two days later, a front-page feature story ran in the New York Times about the forthcoming publication of the Autobiography, syndicated to major newspapers across the country and further fueling interest.

After this successive coverage, UK literary magazine Granta went to press with the first pre-publication excerpt given to a media outlet. It was a risk giving the excerpt to a literary magazine rather than a more commercial outlet, but it felt appropriate due to their having internationally respected contributors plus a highly educated, literary fan base. Their being granted the excerpt was a significant deal for them, and they publicized it widely with events and interviews in the UK and U.S. Immediately, newspapers here and abroad publish articles specifically about UC Press’ decision to give the first excerpt to Granta, generating yet another news story angle.

Keeping the story fresh for months before publication leads to the Autobiography becoming a trending topic, spun to meet the needs of different audiences. The Onion (website: 23 unique visitors per month) appropriated the coverage about potential revelations in the book with a parody article, validating the publication of the Autobiography as a culturally salient event. In a similar vein, the book was satirized in Craig Ferguson’s opening monologue for CBS’ “The Late, Late Show”.

On August 9, Mark Twain ran as the cover story of Newsweek in their special Books issue. 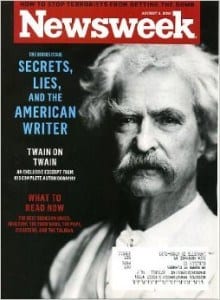 Moving into autumn, fall arts preview coverage starts to appear in media outlets across the country. Time lists the Autobiography as one of 14 books to read. Speaking about the Autobiography, comedian Jon Stewart, promoting his own book at the same time, quips to the AP, “I can’t wait to read that. I just wish I could book him on my show.” Harper’s runs another pre-publication extract in the Readings section of the magazine.

In early October, six months into the media frenzy, books start hitting shelves. Within weeks of release, stories about the bestselling status of the book begin appearing en masse. 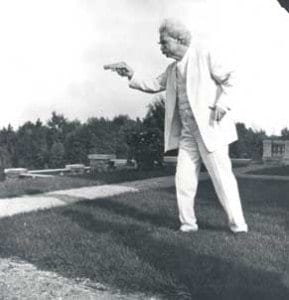 Along with the cavalcade of attention comes inevitable backlash, too. Slate runs a story about the “brilliant brand management behind the handling of this autobiography,” a critical look at what they define as UC Press and the Mark Twain Papers trying to market an old story.

On November 7th, the Autobiography enters the New York Times Best Sellers nonfiction list at #2, where it will remain for 19 weeks.

Throughout November and well into early 2011, review coverage is unprecedented. Adam Gopnik pens an extensive review essay for The New Yorker. Time magazine dedicates a three page-feature to the book. Playboy magazine runs an exclusive excerpt from forthcoming Vol. 2 in their holiday issue. Garrison Keillor writes the front-page, lead review for the New York Times Book Review. The Wall Street Journal also prints a full-page feature review, and long essays run in the London Review of Books, New York Review of Books, to name but a few. Most major newspapers in the UK run not one, but numerous stories about the book; The Guardian, alone, runs a half-dozen articles. The response is global.

Over the course of the promotional campaign, the Mark Twain Papers editorial team will be interviewed on PBS’ Newshour, NPR’s Fresh Air and Morning Edition, The Diane Rehm Show, BBC World Service, profiled on CBS News Sunday Morning, and satirized in a skit on NBC’s Saturday Night Live.

Journalists even produced feel-good stories about Thomson-Shore, the book’s small printer in Michigan which was able to hire back (previously laid-off) staff and find bigger-than-usual trucks to transport stock to warehouses, as upwards of 30,000 copies weekly were produced to meet consumer demand. 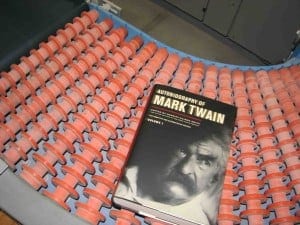 To date, the Autobiography of Mark Twain, Vol. 1 has sold approximately 450,000 copies: a hugely impressive number for any publishing enterprise, in particular a university press. One would imagine that Mark Twain would have been amazed and wittily confounded by the publishing event frenzy that occurred 100 years after his death, a testament to the enduring relevance of his writings and way of thinking in the 21st century.

Vol. 2 and Vol. 3 complete the Autobiography and are available now.

Elephants in the Music Room: The Future of Quirk Historicism
The Para-State