October is National Cookbook Month! Come back for a new recipe each Friday, and click here to save 30% on some of our award-winning cookbooks.

Excerpted from Honey, Olives, Octopus: Adventures at the Greek Table.

If you’re driving down the mountain from Mitata to the secluded paradise of Kaladi Beach on Kythira, it’s best to fortify yourself in advance: there’s nothing at Kaladi but bees, blue water, and stone, and you must descend a small precipice to get there. Hit Restaurant Skandeia first. It’s located beside a dry riverbed and the ruins of the ancient port (destroyed by a massive earthquake and tsunami around 350 BC) and is shaded by huge poplar trees, beneath which you can devour mezedakia prepared by the ebullient Evantheia Protopsaltis.

Always on the lookout for local dishes I haven’t seen before, I spied something strange on Evantheia’s menu called maïntanosalata, or “parsley salad.”

In addition to composed salads built around a foundation of greens, cabbage, tomatoes, or other raw vegetables, many Greek “salates” are actually smears and may not contain vegetables at all: common offerings include melitzanasalata (an eggplant mash vaguely resembling baba ganoush, but more typically made with grilled eggplant and brightened with lemon, garlic, and parsley), tyrosalata (feta smashed with olive oil and often some hot pepper), and taramasalata (a fish roe spread held together with potato or, more commonly, yesterday’s dampened bread).

Maïntainosalata turned out to be one of these. And no wonder I’d never heard of it before, since Evantheia invented it. Like so many Greek dishes, it came into being at the intersection of health and frugality. When she visited her herb garden one day and saw that flat-leaf parsley had taken over the entire bed, Evantheia set to work deforesting the plot, extracting a mountain of parsley she didn’t want to go to waste. Her family suffers from genetic anemia and so she’s always scheming to get her kids to eat iron-rich dishes: on the spot, she found this delicious solution. Turns out parsley—the most popular herb in the Greek kitchen—is rich in iron, not to mention Vitamin C. Her kids never suspected that the meze she created, which they devoured with abandon, contained a dose of powerful maternal medicine.

Juice of one lemon

Soak the bread in warm water for ten minutes, then drain and squeeze out most of the water. Place the parsley, onion, and garlic in a food processor and pulse until finely minced, and then add the bread slowly, with the blade running, until well combined. Add the vinegar and lemon juice along with a healthy pinch of salt and ground pepper.   Then, with the blade running on low, slowly add the olive oil (about half a cup) until the mixture loosens slightly. Serve on small plates with an extra drizzle of very good oil.

Christopher Bakken is Frederick F. Seely Professor of English at Allegheny College.  He is the author of three books of poetry: After Greece, Goat Funeral, and the forthcoming Eternity & Oranges. His poems, essays, and translations have been published widely in the U.S. and Europe.

Autobiography of Mark Twain, Vol. 3: The Story Behind the Cover
"Everyone's Entitled to One Good Scare": Halloween Horror in America's Favorite Holidays 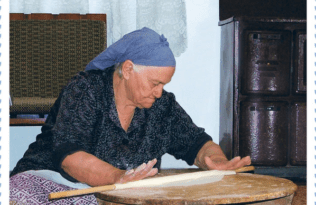 A taste of the next Gastronomica/SOAS Lecture: “Let Them Eat Stuffed Peppers”