Choosing a book’s cover image is always an exciting process, but it can also prove difficult, particularly when you have such a treasure trove of images to choose from, as we do for Mark Twain.

When the image for the cover of Volume 3 of the Autobiography was settled upon, the editors of the Mark Twain Project also provided the backstory. 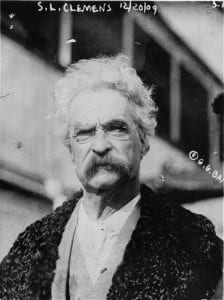 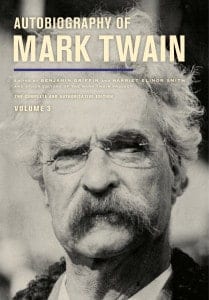 Samuel L. Clemens, aged 74, photographed on arrival in New York after a visit to Bermuda, 20 December 1909.
Photograph by the Bain News Service. Image courtesy of the Library of Congress.

The photograph of Clemens was taken by a photographer from the Bain News Service on December 20, 1909, when Clemens’s ship arrived in New York after a visit to Bermuda, where he stayed with the Allen family. He was traveling with his friend and future biographer, Albert Bigelow Paine.

Below is a letter of thanks Clemens wrote on shipboard to Marion Schuyler Allen, his hostess in Bermuda, in which he refers to Paine’s seasickness and his own angina pains:

On board, Sunday noon.
Dear Mrs. Allen:
I don’t know how to thank you & Mr. Allen enough for the perfectly charming time you have given me. I have never had a lovelier time, & I can’t get over being sorry that it had to come to an end.

This is not a comfortable voyage. We plunged into heavy seas before the waving handkerchiefs & the flag were were an hour out of sight, & nine-tenths of the passengers were abed before dinner time. Paine succumbed early, & got extravagantly seasick, & that other pain (the one in my breast) kept me entertained until 3 this morning. There is still enough sea to make writing difficult.

Jean has been having an adventure, & I send you her letter. You needn’t return it. Think of that excited & innocent Frenchman ordering that well-trained & obedient dog to lie down & keep still when he particularly wanted him to get up & ’tend to business! A very good dog. As soon as Jean said “Los!” (Go! fly! rush!) he reinstated his injured reputation.

I wish I was back in that hospitable Bay House. What a contrast its comfort is to the dismal ship!

With love to you all,
Affectionately yours
SL. Clemens

Clemens was looking forward to his Christmas at home with his daughter Jean, who loved the holiday and apparently was already at work buying presents and making preparations. Jean died (of heart failure during an epileptic seizure) on Christmas eve, December 24, 1909, before her decorated tree could be discovered, the holiday celebrated, and the presents distributed. Clemens’s despair at her death brought an end to the autobiography, with “Closing Words of My Autobiography,” which begins: “Jean is dead! And so this Autobiography closes here. . . .”

After another trip to Bermuda, and worsening angina, Clemens died at home in Redding, Connecticut, on April 21, 1910, just four months after this photograph was taken.

This image is essentially an early paparazzi shot—press were waiting for him as he disembarked from the ship—and while he complied with the journalist’s request to take a photo, the pain and exhaustion from the journey is etched into his face and visible in his eyes. From this point on, his health would quickly worsen, so it is one of the last images we have.

Stay tuned for the stories behind the covers of Volume 1 and Volume 2.