by Evan Berry, author of Devoted to Nature: The Religious Roots of American Environmentalism

Some Americans, especially among the most trenchant ranks of conservative Catholics, have expressed outrage about Pope Francis’ direct engagement with environmental issues. For example, in his open letter explaining his boycott of the Pope’s address to Congress, Representative Paul Gosar (R-AZ) decried the Vatican’s unfortunate departure from “standard Christian theology.” In a different line of attack, the Heartland Institute, a conservative think tank, claims to have identified the creeping influence of “paganism” in Laudato Si, the Pope’s encyclical on climate change. One the other side of the aisle, many political liberals, both inside and outside the American Catholic community, are thrilled about Pope Francis’ candid discussion of climate change and his message of justice and mercy. Setting aside for the moment the embittered and divisive tenor of American politics, this public scuffle reminds us that many people in the U.S. continue to disagree not just about what bearing religion might have on environmental issues, but about whether it should have any bearing at all.

When climate skeptics suggest we “leave science to the scientists,” they are asserting a partition between the technocratic process of policy construction and various other forms of knowledge, including especially religiously grounded moral convictions. This is an old ideology about the place religion ought have in American public life, one that holds that religion is primarily about private beliefs and that it should not be publicly invoked in political discourse. A number of excellent books have described the way this paradigm held sway throughout the middle decades of the 20th century, but receded into the background along with the rise of the Christian Right as an internally coherent voting block (e.g. Christian Smith’s Christian America). Although it is ironic that this point of view should reappear among precisely the same constituency that once tore it down, the underappreciated story about conservative religious objections to religious environmentalism is that they are historically wrongheaded. 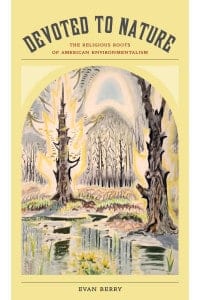 The idea that Christianity is a radically anthropocentric religion drove a deep wedge between environmentalists and traditionalists, but as religiously inflected ecological movements continue to grow and mature, other stories about Christianity’s environmental legacy are resurfacing. Devoted to Nature tells such a story, arguing not that Christians have been central to the development of the American environmental movement, but that Christian theological ideas have had a profound impact on the particular shape the movement took, especially during the formative decades at the end of the 19th and beginning of the 20th centuries. Questions about whether or not human beings should be understood as part of the natural order or as something apart from it are equally essential to both environmentalism and to Christian theology. Efforts to reconcile humanity to a broken and betrayed environment are deeply indebted to the Genesis account of human origins. As Pope Francis and other religious leaders continue to agitate for climate justice, we would do well not to ask whether their voices have a legitimate place in environmental politics, but instead to ask more probing questions about how our environmental politics themselves are generated by our religious histories.

Evan Berry is Associate Professor of Philosophy and Religion at American University and Codirector of its Ethics, Peace, and Global Affairs master’s program. 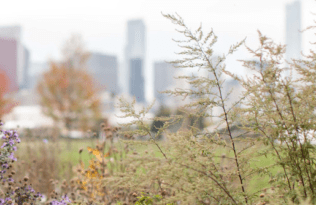 The Intersection of Religion and Environmental Activism

The Future of our National Parks System