While not subject to outright ban, UC Press’ own Film Quarterly was caught up in Red Scare hysteria early in its history.

Formerly known as the Quarterly of Film, Radio, and Television, which had descended from the earlier journal Hollywood Quarterly, it was because of this long-standing journal that the University of California Press itself garnered a “subversive” label in the 1950s.

“That journal had been born from an unlikely union of the Press with the post-war Hollywood Writers Mobilization—a group of smart Hollywood reds who thought the post-war American film deserved intelligent discussion. (The connection ultimately got the Press listed on the California legislature’s subversive list.) As the blacklist took its toll in Hollywood, Hollywood Quarterly’s writers mostly went underground and left the journal to evolve in a sociological direction, focusing on mass media studies under the new title.”

Fortunately for what was to become Film Quarterly, new editor Callenbach and the board for the developing journal persevered.

“Our goal in 1958 was to collect a team of knowledgeable and ardent people who could energize an American film magazine on a reasonably high intellectual level. We wanted to cover narrative features and also documentaries and experimental films, new trends in style and structure and content; we wanted to keep in touch with film history … it became normal for educated people to take film directors as seriously as they took novelists. Film won acceptance as a kind of visual literature, part of a vibrant political-cultural life, something urgently talked and argued about, and Film Quarterly plunged into this pool of energy.”

You can read more about the fascinating history behind Film Quarterly here.

Film Quarterly has published substantial, peer-reviewed writing on cinema and media for nearly sixty years, earning a reputation as one of the most authoritative academic film journals in the United States, as well as an important English-language voice of cinema studies abroad. Find Film Quarterly on UC Press Journals, Facebook and Twitter.

Escape to Prison: A Look Inside
Banned Books Week: For Further Reading 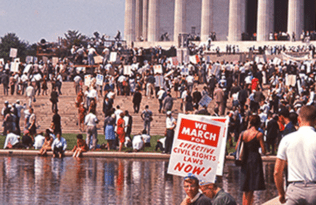 Opportunities to Connect with Feminist Media Histories at #SCMS18