This guest post is published in advance of the American Sociological Association conference in Chicago. This post by Andrea S. Boyles reflects on the shooting of Mike Brown before the one year anniversary of his death. Check back often for new posts.

You begin the preface of Race, Place, and Suburban Policing with the shooting death of Michael Brown in Ferguson (e.g., a St. Louis suburb). On the year anniversary of his death, what do you see that has changed?

A lot has happened since Mike Brown’s death, from increased social awareness and grassroots mobilization efforts to the grand jury’s decision to not indict Officer Darren Wilson and additional Black citizen-police conflicts.

More directly, in the wake of the Department of Justice (DOJ) report, the following changes occurred within Ferguson’s city government:

John Shaw, the city manager, resigned. The DOJ investigation found him encouraging the use of the municipal court in generating revenue for the suburb; Municipal Court Judge Ronald Brockmeyer resigned. Brockmeyer presided over the Ferguson municipal court, where DOJ found racially discriminate practices to be pervasive. He was replaced by a MO Supreme Court state appointed judge; Police Chief Thomas Jackson resigned. It was determined by the DOJ that his officers engaged in problematic policing tactics & used citizens to generate city revenue; the DOJ investigation also turned up racist emails, consequently, leading to the firing of two police officers and a court clerk in connection; a citizen review task force has been appointed to vet and make recommendations for establishing a Ferguson citizen review board; and following the first municipal election after Mike Brown’s death, Ferguson’s City Council now has three black council persons out of six. Previously, there had only been one.

Other occurrences included the use of body cameras by Ferguson police officers, the replacement of two makeshift Mike Brown memorials at the scene of his shooting with a bronze dove and plaque on what would have been his 19th birthday; modified practices with the municipal court and its response to citizens; increased community activities and partnerships such as volunteerism, activism, job fairs, and revitalization efforts for Ferguson schools, businesses, and neighborhoods. Furthermore, there is a push for reform in the entire St. Louis region, particularly as there are additional DOJ investigations underway and black citizens in the inner-city and suburbs face on-going bias treatment in a wide array of ways across the social spectrum.

In sum, there have been quite a few changes—subtle/overt, better/worse, immediate/forthcoming—throughout the year in Ferguson. Hence, it is important to note that “change” can be broadly interpreted, particularly when accounting for power and privilege or the lack thereof as experienced in everyday living among diverse populations. Nevertheless, the aftereffects from Mike Brown’s death and other cases alike are continuously evolving in Ferguson, the St. Louis region, nationally and internationally.

Why was important to you to focus your research on suburban communities? 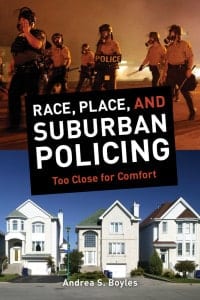 Ferguson is why it was important for me to focus my research on suburban communities. While my book targets Meacham Park—a black enclave, located in an affluent suburb roughly 15 miles away—it was the antecedent to black citizen-police conflict and civil unrest in Ferguson and other locations outside of city limits. In short, significant attention has been given to the differential policing of blacks and social injustice in urban settings; while, similar or worse experiences of blacks have largely been ignored as they reside in other settings. Consequently, my research in suburban communities provide a framework for understanding the everyday ambiguousness of policing, politics, and the overall social experiences of blacks as they live in the suburbs and yet often remain isolated and faced with persisting disenfranchisement.

Based on your research, how can we improve police-community relations?

While there are countless suggestions for improving police-community relations, my research first lends itself to broad solutions in three areas: political awareness and sensitivity, political inclusion, and political accountability. The police adhere to the policies and practices of its local government. Consequently, police departments and their day-to-day interactions often reflect the temperament of those most empowered. More directly, my research found black citizen-police relations improving through numerous actions ranging from simple gestures such as officers waving while out patrolling to police participation in community programs/activities and more tangible training.

Andrea S. Boyles is Associate Professor of Criminal Justice at Lindenwood University-Belleville. She has also taught inmates and correctional officers within the Missouri prison system.

A Drier Future: Lynn Ingram's Q&A with Sunset
Getting Ahead of the Endangered Species Act