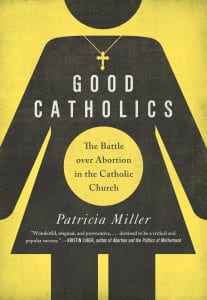 We’re pleased to announce that Patricia Miller’s book, Good Catholics: The Battle over Abortion in the Catholic Church, is a Gold Medalist in the 2015 IPPY Awards for Women’s Issues. The IPPY Awards are presented by the Independent Publishers Book Association to recognize excellence in independent book publishing.

Good Catholics recounts the dramatic but largely untold history of protest and persecution in the pro-choice debate within the Catholic Church. The book follows the nearly fifty-year struggle to establish the moral legitimacy of pro-choice Catholics, also illustrating the profound influence that the conflict has had on the church itself as well as upon the very fabric of U.S. politics.

Our congratulations to Patti!

Kitty Calavita wins the LSA Kalven Award
Jornalero: Being a Day Laborer in the USA