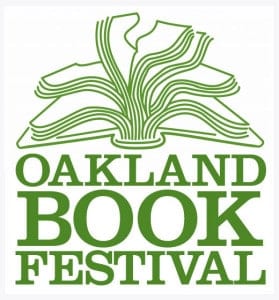 UC Press is proud to be sponsoring the first Oakland Book Festival, where 90 novelists, poets, historians, philosophers, journalists, and activists will engage event goers in panels, interviews, and open debate. Stop in for conversations about gentrification, multiculturalism, whistle-blowing, city life, and the future of American literature. While you’re there, come by the UC Press table to say hello and browse the great books we’ll have for sale.

The festival will be held on May 31, from 11:00am to 6:00pm, at Oakland City Hall, 1 Frank Ogawa Plaza, Oakland, CA. It is free and open to the public. A full list of activities and speakers can be found at www.OaklandBookFestival.org.

Be sure to stop by the panels and interviews featuring UC Press authors.

Leslie C. Bell, author of Hard to Get, will be participating on the “Writing Sex” panel alongside Melanie Abrams, Tracy Clark-Flory, and Maria Dahvana Headly. Her book draws on her years of experience as a researcher and a psychotherapist taking us directly into the lives of young women who struggle to negotiate the complexities of sexual desire and pleasure, and to make sense of their historically unique but contradictory constellation of opportunities and challenges. In candid interviews, Bell’s subjects reveal that, despite having more choices than ever, they face great uncertainty about desire, sexuality, and relationships. Leslie C. Bell is a sociologist and psychotherapist who specializes in women’s development and sexuality. She maintains a private practice in Berkeley, California.

Kiera Butler, author of Raise, will be participating on a panel presented by UC Press titled “Building a Food Literate Society” alongside Kim O’Donnel and Naomi Starkman. In Raise, she sets off on a search for a “real” 4-H’er, a hypothetical wholesome youth whom she imagines wearing cowboy boots and living on a ranch. Along the way, she meets five teenage 4-H’ers from diverse backgrounds and gets to know them as they prepare to compete at the fair. Butler’s on-the-ground account of the is interwoven with a fascinating history of the century-old 4-H club as it solicits corporate donations from top agribusiness firms such as DuPont, Monsanto, and Cargill. Kiera Butler, an award-winning writer and senior editor at Mother Jones magazine, has written extensively about the environment. Her work has appeared in Orion, Audubon, and Columbia Journalism Review.

“Building a Food Literate Society” will be held in Hearing Room 3 at Oakland City Hall from 2:30-3:15.

Ben Fong-Torres will be in conversation with Derek Richardson. Ben’s book, The Rice Room, tells the story of growing up with a double identity—Chinese and American. Ben Fong-Torres was torn between an alluring American lifestyle—including Elvis and rock ‘n’ roll—and the traditional cultural heritage his proud immigrant parents struggled to instill in their five children. Illustrated with personal family photographs as well as photos of the author with various celebrities, Fong-Torres rounds out his life story with a new final chapter. Ben Fong-Torres is the author of many books, including Becoming Almost Famous: My Back Pages in Music, Writing and Life, Not Fade Away: A Backstage Pass to 20 Years of Rock &’ Roll and The Hits Just Keep on Coming: The History of Top 40 Radio.

Ben Fong-Torres will be in conversation with Derek Richardson in Council Chambers at Oakland City Hall from 12:45-1:30.

Julie Guthman, author of Agrarian Dreams and Weighing In, will be appearing on a panel titled “The Labor of Food” presented by UC Press alongside fellow UC Press author Seth Holmes as well as Esperanza Pallana and Dana Perls. Agrarian Dreams challenges accepted wisdom about organic food and agriculture in California. Many continue to believe that small-scale organic farming is the answer to our environmental and health problems, but Guthman refutes popular portrayals that pit “small organic” against “big organic” and offers an alternative analysis that underscores the limits of an organic label as a pathway to transforming agriculture. Weighing In takes on the “obesity epidemic,” challenging many widely held assumptions about its causes and consequences. Guthman examines fatness and its relationship to health outcomes to ask if our efforts to prevent “obesity” are sensible, efficacious, or ethical. She also focuses the lens of obesity on the broader food system to understand why we produce cheap, over-processed food, as well as why we eat it. Julie Guthman is Professor of Social Sciences at the University of California, Santa Cruz.

Seth Holmes will be appearing with fellow UC Press author Julie Guthman on the “The Labor of Food” panel presented by UC Press. Fresh Fruit, Broken Bodies provides an intimate examination of the everyday lives and suffering of Mexican migrants in our contemporary food system. An anthropologist and MD in the mold of Paul Farmer and Didier Fassin, Holmes shows how market forces, anti-immigrant sentiment, and racism undermine health and health care. Holmes’s material is visceral and powerful. Seth Holmes is an anthropologist and physician. He received his PhD in Medical Anthropology from the University of California, Berkeley and San Francisco, and his M.D. from the University of California, San Francisco. He is Martin Sisters Endowed Chair Assistant Professor of Public Health and Medical Anthropology at the University of California, Berkeley.

Gordon Young will be appearing on the “What is Gentrification?” panel with Lance Freeman, Malo André Hutson, and Dashka Slater. Gordon Young’s book, Teardown, blends personal memoir, historical inquiry, and interviews with Flint, Michigan residents. Young constructs a vibrant tale of a once-thriving city still fighting—despite overwhelming odds—to rise from the ashes. He befriends a rag-tag collection of urban homesteaders and die-hard locals who refuse to give up as they try to transform Flint into a smaller, greener town that offers lessons for cities all over the world. Hard-hitting, insightful, and often painfully funny, Teardown reminds us that cities are ultimately defined by people, not politics or economics. Gordon Young grew up in Flint, Michigan. After reaching an uneasy truce with the nuns in the local Catholic school system, he went on to study journalism at the University of Missouri and English literature at the University of Nottingham. His work has appeared in the New York Times, Slate, Utne Reader, and numerous other publications. Young has published Flint Expatriates, a blog for the long-lost residents of the Vehicle City, since 2007. He is a senior lecturer in the Communication Department at Santa Clara University and lives in San Francisco.

Finally, UC Press’ Eric Schmidt, classics and religion editor, will also be moderating a panel at the festival. Journalist and author Gregory Jordan (New York Times; author of The Saints Are Coming) and the Reverend Dr. Harold R. Mayberry (senior pastor of First African Methodist Episcopal Church) will share their experiences in Juarez, Mexico, and Oakland, California, and their insights into the transformative powers of faith in a complex and dangerous world.

Visit us at the American Library Association (ALA) 2015