On March 31 NASCAR issued a statement denouncing Indiana’s new “Religious Freedom Restoration Act.” The racing organization, whose name often serves as a synonym for “redneck,” announced its rejection of intolerance and intention to welcome all racers and fans. Its statement came amid international media coverage of Indiana businesses that, under presumed protection of the law, had begun denying service to same-sex couples.

Similar protests surfaced on various fronts. The previous day had witnessed the first withdrawal of a convention. Pulling their national meeting and their money out of the Hoosier state, the municipal workers’ union AFSCME expressed “disgust and disappointment” at this “un-American” law allowing unequal treatment of certain people “simply because they are gay or lesbian.” Further declarations followed, including the first anti-RFRA concert cancellation, by the band Wilco.

For those concerned with LGBTQ civil rights and social justice, the best news in all this was the swift, widespread opposition to the law’s signing. Indeed, the public response marked a watershed. In past instances, framing LGBTQ rights as special rights was effective political strategy. Now, GOP legislators and Governor Mike Pence found themselves on the wrong side of a new perception of fairness and justice, which saw them singling out LGBTQ individuals for special discrimination.

As a Midwestern “fly-over” state known for small towns and blue-collar lives, Indiana aligns with images of homo- and transphobia that have become etched, lethally, over a quarter-century: Brandon Teena in Nebraska, Matthew Shepard in Wyoming, Brokeback Mountain’s Ennis and Jack in Wyoming and Texas. Perhaps passage of a bigoted, homophobic law is simply to be expected here. But when we note the prominence among RFRA protesters of NASCAR rednecks, union labor, and an alternative country band, the picture appears less simple.

This unexpected constituency mirrors a forgotten history, at odds with present notions casting the working class as specially homophobic. In fact, the stereotype of the working-class homophobe is of recent vintage. For a hundred years, from the 1870s birth of the homosexual until the 1970s birth of the homophobe, working-class people were faulted not as homo haters but as homo lovers.

It’s time to recall this history, now obscured by four decades of what I’ve called “the middle-classing of the queer.” It can serve as key to unlocking the radical coalition-building potential of queer politics, and to recognizing the middle and working classes’ shared stakes in the current crisis of inequality. 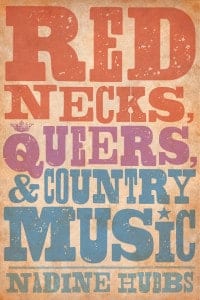 Nadine Hubbs is professor of Women’s Studies and Music and director of the Lesbian-Gay-Queer Research Initiative at the University of Michigan and author most recently of Rednecks, Queers, and Country Music.

CATEGORIES: From Our Authors, Music, Politics

99 Problems But Authenticity Ain’t One