This guest post is by author John R. MacArthur, The Selling of “Free Trade”: NAFTA, Washington, and the Subversion of American Democracy

Trade agreements and the political conflicts surrounding them are back on American front pages because of a split in the Democratic Party over the proposed Trans Pacific Partnership (TPP). Just as in 1993, when President Clinton forced the passage of the North American Free Trade Agreement (NAFTA) over objections from his party’s majority, pro-labor membership, President Obama has reopened the debate about what “free trade” means to U.S. workers and the politicians who purport to represent their best interests. Like the titanic fight over NAFTA, the battle over TPP will be marked by false advertising, vote-buying on a grand scale, and slick propaganda produced by the smartest people in American promotion and marketing. The pro-free trade lobbies are right now martialing their immense resources to beat back opponents angered by the failure of NAFTA and other subsequent trade deals to deliver on their promises to raise wages, increase exports and employment, and improve environmental conditions in the countries party to the agreements.

The Selling of “Free Trade”: NAFTA, Washington and the Subversion of American Democracy, is the only book that tells the complete, inside story of how NAFTA got passed. With detailed reporting and documentation, I chronicle the dirty politics, the ideological arguments, the large sums of money that changed hands, and the specific consequences of NAFTA for both American and Mexican workers. I explain how Bill Clinton, Al Gore, and the Business Roundtable bested an oddball coalition made up of 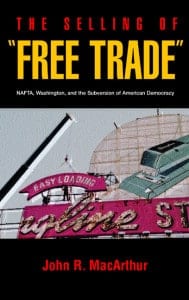 the billionaire Ross Perot, the AFL-CIO and its allies in Congress, and various right-leaning nationalists.

Today, the same scenario is playing out: a liberal Democratic President is pushing a trade deal almost certain to send more manufacturing jobs overseas to cheap labor locales, but to succeed he needs, like Clinton, to ally himself with the Republican Party and its biggest financial backers. To understand what will take place in the next few months on TPP—including the initial conflict over passage of so-called Fast Track authority—The Selling of “Free Trade” is essential reading. Written in 1999 and 2000, the book takes into account, in the University of California Press edition’s afterword, the similar fight that took place in 2000 over the passage of Permanent Normal Trade Relations with China. The Selling of “Free Trade” is a serious primer on the realities of American politics, but it’s also serves as a media handbook for following the day-to-day political action in Washington and New York, where the fate of TPP will be decided by a handful of influential politicians and lobbyists.

John R. MacArthur, publisher of Harper’s Magazine, is an award-winning journalist and author of Second Front: Censorship and Propaganda in the Gulf War (California, 1993).