Every April, Daniel Handler, also known as Lemony Snicket, reads only poetry in honor of National Poetry Month. This year, he gave a shoutout to two of our poets on both Twitter and in this great article on the Huffington Post. Handler is author of The Basic Eight and the A Series of Unfortunate Events books (also adapted to a 2004 film starring Jim Carrey, and soon to be adapted to a Netflix series).

“Poet: Harryette Mullen
How they strike me: When someone holds your hand and looks you in the eye and won’t let go until you stop trembling.
Book I like of theirs: Sleeping With The Dictionary. No, wait: Urban Tumbleweed. OK, get them both.
Representative lines:
Beside the bed, a pad lies open to record the meandering of migratory words. In the rapid eye movement of the poet’s night vision, this dictum can be decoded, like the secret acrostic of a lover’s name.
Suggested beverage pairing: What’s in this tea? Has the sky been this color all this time?”

“Poet: Mei-Mei Berssenbrugge
How they strike me: Like a conversation so terrific you stay up too late to finish it and the next day are cranky but it’s worth it.
Book I like of theirs: I Love Artists
Representative lines:
I seek a permanent home, but this structure has an appearance of indifferent compoundedness and isolation, heading toward hopelessness.
The boys pulls an animal on a leash.
Suggested beverage pairing: Wheatgrass juice, side of aquavit.”

Have You Hugged Your Planet Today?
Dry Land: Surprising Ways to Conserve Water in Our Current Drought 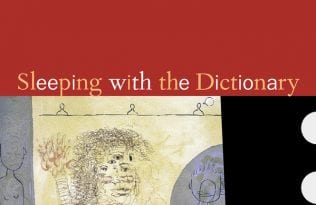