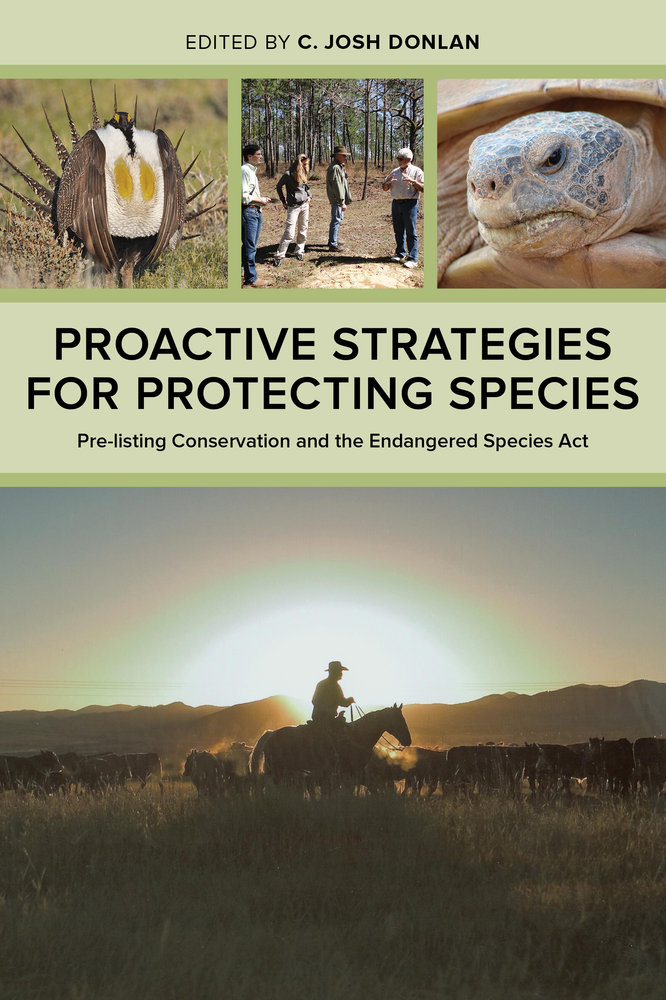 Beyond the obvious scholarship that goes into any UC Press book—research, writing, and editing—are challenges that even sophisticated readers and reviewers may remain happily unaware of. In this multi-part Behind the Scenes series, we throw light on the hurdles UC Press authors face in bringing their work to the public. From field work logistics in foreign countries, to the regulatory snags of evolving public policy, to the unique concerns that scholars of human subjects face, learn about the lengths to which authors go to present their scholarship to the public.

The US Endangered Species Act protects over 2,000 species. Only 10 species have gone extinct after they were listed. On the other hand, only 25 species have been “de-listed” (meaning they’ve recovered enough to be considered safe from extinction).

Between those two statistics lie myriad perspectives on how well the ESA has performed since its ground-breaking inception over 40 years ago.

Josh Donlan, editor of the just-published Proactive Strategies for Protecting Species, has corralled unlikely bedfellows—private landowners, conservationists, government agencies, NGOs, scientists, academics, and developers—into sharing divergent viewpoints on how best to improve the ESA—that it’s outdated is the one point on which they all agree. (The ESA hasn’t been updated in 25 years, and litigation robs resources earmarked for species conservation.) He also debuts a pragmatic new approach to best conserve species headed toward extinction … helping as they speed toward the falls, rather than triaging after they’ve plunged over.

As Michael Bean notes in the foreword:

For many species, the protections of the ESA come very late in the game, when the odds are heavily stacked against success. If there is one clear lesson from the experience with the ESA over the past four decades, it is that conservation efforts need to get started earlier, before the plant and animal species reach the point at which they are at a high risk for extinction.

Switching from Stick to Carrot

Remember the adage “an ounce of prevention is worth a pound of cure?” It turns out that stewardship applied before a species gets listed means a great deal less animosity among stakeholders, which translates into much less litigation and wasted money. The species fares much better, too. Thus the birth of PLC, or pre-listing conservation, an approach that rewards efforts made “upstream” (before a species becomes a candidate for listing).

So who are these stakeholders, and why are they at odds?

Well, contrary to the vague notions some city folk may have about wildlife existing somewhere over there—in national parks, for instance—most species in trouble are found on public lands where environmental projection is not the primary goal (military bases, for instance) or on private property: almost three-quarters of US land is private. (But before you conjure up images of suburban backyards, think large-scale. Private in this context means large ranches and farms or large solar and wind development projects.)

If these landowners face a regulatory morass once a species on their land gets into enough trouble to become a candidate for ESA listing, why don’t they just adopt conservation best practices immediately? The answer is as complicated as the regulatory maze such property owners will find themselves in if they don’t practice sound stewardship. But stewardship is often expensive, either in actual dollars or in lost opportunities, and heretofore the “stick” of legal tangles has been the tool of choice over the “carrot” of reward.

The PLC approach aims to change that, adopting a landowner-centered approach of persuasion rather than punishment.

Around the world, success in environmental conservation depends in some part on actions in two overlapping spheres of policy: policies that prevent further environmental damage from occurring and those that promote proactive measures to improve environmental conditions. Laws like the ESA are strongest at preventing additional harm from occurring. In contrast, the ESA and most biodiversity laws around the globe offer few mandates that incentivize stewardship investments. (p 220) 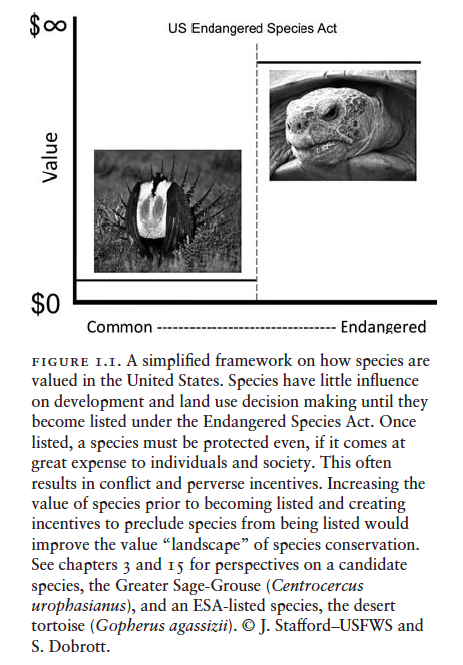 As Josh Donlan notes, “the way we tend to value species in the US and elsewhere around the world is that it’s worth very little in terms of our decision-making until it becomes endangered, and then it’s worth almost an infinite amount as soon as it gets listed in the ESA—which is a really bad way to manage species and a really good way to create perverse incentives and piss people off.”

Donlan runs an NGO called Advanced Conservation Strategies. His job is to offer better conservation solutions both within US borders and around the globe. The book is “a direct result of a project we ran in the southeast for about 2 to 3 years in collaboration with Todd Gartner of the World Resources Institute that focused on the Gopher tortoise.” Part of the range of the gopher tortoise is listed under the ESA and part of its range is not: it’s a candidate species. Donlan notes that like many species in the US, it has declined over the past decades because of “multiple drivers but mainly from habitat destruction because it only lives in long-leaf pine forests.”

To design a program that shifted incentives for “doing good’ for species and habitat conservation before ESA listing, Donlan and his team used the gopher tortoise as an on-the-ground case study. They worked with the Department of Defense, the US Army at Fort Benning, Georgia—the tortoise was doing just fine inside the base’s almost 200,000 acres, since there was no development—US Fish and Wildlife Service (USFWS) in Washington DC and in the southeast, as well as with NGOs in and around Fort Benning to try to create an overall program that covered three main areas: the supply side, the demand side, and transactional infrastructure. The questions they hoped to answer for each area:

By the time the project was ending—that is, funding was running out—it became clear that one way to provide value would be to document all the important stakeholders’ perspectives (USFWS, the Marine Corps, NGOs, ranchers, solar companies) in a book that focused on solutions-based program design. “After working for 3 years on the idea that’s now become known as PLC, it wasn’t hard to put together the authors for this book; we already had a working group,” says Donlan.

Structured as a design handbook with essays, Donlan admits that seventeen chapters with seventeen diverse authors was challenging. “I’m not going to do it again soon, since it’s a lot of work to make one coherent voice while also capturing the diversity of perspectives. But I had fun trying to do so.”

USFWS announced a draft policy in the Federal Register in September of 2014. With the USFWS cautiously optimistic about the PLC template but slow to push for pilot projects, and the DOD and private sector onboard only if they can get assurances from the USFWS, Proactive Strategies for Protecting Species might help prevent a standoff.

“The timing couldn’t be better. We hope this book, with insights for the government and program designers, can help the Service push forward in 2015 … since no one can move forward until they do. The obvious next step is for the Service to approve, promote and support pilot projects for candidate species where PLC make sense.”

Given that this is about the ESA, most people assume PLC doesn’t apply elsewhere, except maybe to select places in Europe and Australia. But it does: “Even though we have this risk of regulation, we’re trying to move the incentives upstream to the other side of that risk. That’s actually closer to how most countries operate—with either very weak environmental regulation or none at all.” Given widely differing legal frameworks, a HCD approach provides a process that can be used to design and implement widely, across diverse conditions.

Luckily, Donlan’s NGO operates widely outside the US, so he’s had plenty of opportunities for field testing. “We are trying this approach to program design around the world: with ranchers in Argentina and fishermen in Chile and Thailand. Our preliminary results suggest that co-designing solutions with the target stakeholders results in more durable solutions—for both people and the environment.“

Josh Donlan (@ACSbuzz) founded and directs Advanced Conservation Strategies, which brings human-centered design approaches to problem-solving and innovation in the environmental sector. In Chile, ACS is designing and testing a market model that provides measurable coastal biodiversity benefits while simultaneously providing livelihood security to fishing cooperatives. ACS is also helping to design and implement programs to reverse the decline of dugongs and seagrass habitats in India, Mozambique, Papua New Guinea, and Thailand. Proactive Strategies for Protecting Species is available March 20.

Skiing into Modernity
Can't Catch a Break: Gender, Jail, Drugs, and the Limits of Personal Responsibility 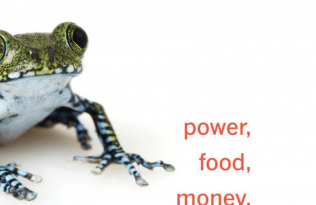 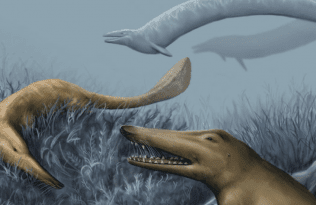 The Walking Whales: From Land to Water in Eight Million Years