While we certainly talked about New York’s unseasonably cold weather during CAA this year, we also asked our authors what museums and exhibitions they visited, what their favorite panels were, and what books they were most excited to see in our booth. Thanks to everyone who came through and made it a successful and inspiring conference. 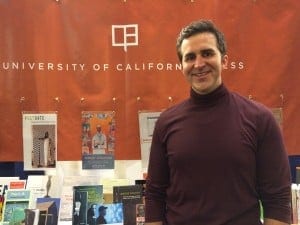 “I was consumed with work during CAA, so I had very little opportunity to explore New York fully. However, I managed to steal away to the On Kawara exhibition at the Guggenheim, which was a total revelation. Kudos to Jeffrey Weiss for putting together such an incredibly poetic show.

As to the UCP booth, of course I was thrilled to see Sarah Hamill’s book on David Smith. Three cheers for midcentury sculpture!”

“I was honored, as a recent UC Press author, to be included in the CAA panel on NEH-sponsored research and to have the chance to talk about how grant support from the endowment made it possible to conduct the research in Europe, Tahiti, and the United States that was essential to my book. That support, plus the Meiss publication grant, and the very hard work of many colleagues at UC Press, made the goal of getting the book out a reality. I was delighted to see André Dombrowski’s book on Cézanne, and put it on the top of the growing ‘next to read’ pile on my desk.” 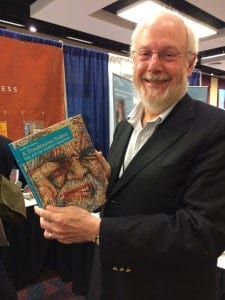 “Happy to see my Robert Arneson monograph at the book fair among all the terrific UC books!”

—Jonathan Fineberg, author of A Troublesome Subject: The Art of Robert Arneson 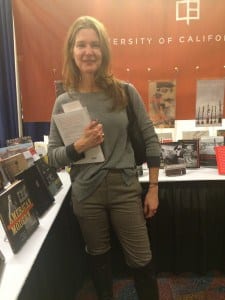 “I was in New York only for one day, pretty much just to meet you guys! So aside from MoMA and the book fair I only attended Alfredo Jaar’s opening at Lelong that night. At MoMA I saw a couple of shows, including a striking exhibit on Dubuffet whose title I loved: Jean Dubuffet: Soul of the Underground! The paintings, prints and drawings were so seductive—what a range of techniques and materials! I have seen plenty of Dubuffet but the contained galleries and the selection really enhanced the presentation.

The UCP booth looked terrific—so many appealing books—but the one I want to read now is the one I am holding in the pic: Breaching the Frame: The Rise of Contemporary Art in Brazil and Japan by Pedro R . Erber. Can I have a desk copy???” 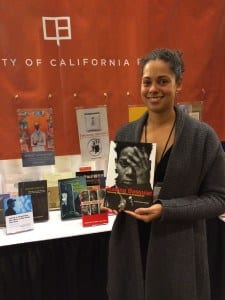 “Sadly, I am usually too wrapped up in all the panels at CAA to venture to many galleries or museums. However, I was happy to escape to the Studio Museum in Harlem to see Titus Kaphar’s Jerome Project. His engagement with the prison industrial complex is both very timely and deeply personal.

I am really excited about Come as You Are. One of the most exciting things about being an art historian who specializes in contemporary art is that my field of study continues to expand. I am eager to work toward a critical view of the 1990s and hope to teach a course on this period in the near future.” 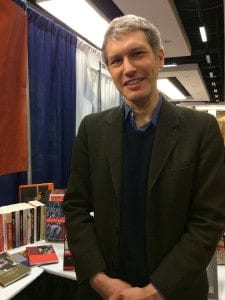 “As a New Yorker, I didn’t feel the need to see any shows during the conference, but I am happy to plug the On Kawara show at the Guggenheim. It’s a brilliant installation of a brilliant artist. The inclusion of the cardboard boxes containing a section of a newspaper page from the day that Kawara created the related date painting reveals him to be, somewhat surprisingly, one of the most politically engaged artists of the 1960s.

I was most excited to read Sarah Hamill’s new book David Smith in Two Dimensions on the photographs of David Smith. I have already read two chapters and it has really helped me think through aspects of Smith’s art.”

—Robert Slifkin, author of Out of Time: Philip Guston and the Refiguration of Postwar American Art 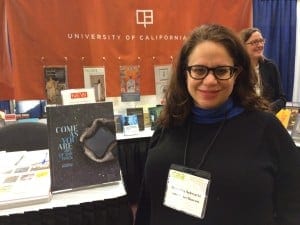 “The best thing about CAA for me is always checking in on the state of the field and new scholarship. It was wonderful to see all the exciting new titles at the book fair, and even better is catching up with some of the authors themselves!”

—Alexandra Schwartz, author of Come as You Are: Art of the 1990s 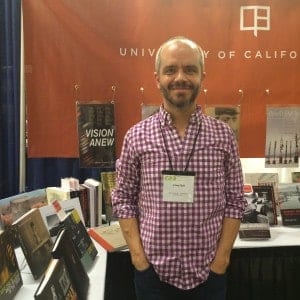 “Since I was only able to make it to part of the conference, I was only able attend three panels, which were all good. Of the three, I especially enjoyed ‘A Social Medium: Photography’s History of Sharing,’ which was organized by Elizabeth Cronin and Stephen Pinson, who also curated a great show on the same topic at the NYPL. Kate Palmer Albers’s paper on Snapchat was particularly interesting. I’m looking forward to her book from UC Press.

I was interested to look at Come as You Are: Art of the 1990s by Alexandra Schwartz. I was also excited to take a closer look at Rebecca Solnit’s two atlas books, Infinite City and Unfathomable City, neither of which is new, but I hadn’t gotten a chance to look more closely at either of them.”

“My favorite panel was ‘Motion Pictures: Contemporary Visual Practices of Movement and Stillness,’ particularly the paper, ‘Becoming Sculpture: Film in the Third Dimension’ by Susan Felleman, Professor of Art History and Film and Media Studies, University of South Carolina (and my wife).

Besides my colleague Ross Barrett’s book, Rendering Violence: Riots, Strikes, and Upheaval in Nineteenth-Century American Art, I was excited to see Sabine Kriebel’s Revolutionary Beauty: The Radical Photomontages of John Heartfield. My review of it will be in the American Historical Review in April.”

“I didn’t have much time to break away from the conference, but I did make a brief trip to MoMA, where I enjoyed seeing David Siquieros’s Collective Suicide of 1936 (a work I hadn’t ever seen in person). As for CAA, I thought the panels Rethinking Labor and New Genealogies of American Modernism were excellent, and I was excited to see David Lubin’s Flags and Faces on display at the UC booth.” 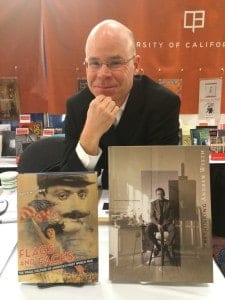 “I enjoyed the chance to visit the University of California Press booth, which displayed an advance copy of David Lubin’s terrific new book Flags and Faces: The Visual Culture of America’s First World War, the newest title in the Franklin Murphy Lecture Series, published in association with the Spencer Museum of Art and Kress Foundation Department of Art History at my home institution, the University of Kansas. While in New York I also got to several museums—MoMA, the Guggenheim, and the Metropolitan—primarily to see special exhibitions. I particularly enjoyed the magnificently installed Thomas Hart Benton’s America Today Mural Rediscovered at the Met in the company of its co-curator, my friend and former student Randy Griffey, a native Kansan who earned his PhD in art history from the University of Kansas. Randy is also responsible for Reimagining Modernism: 1900–1950, the first-ever thematic installation of the Met’s modern collection, which has never looked better.” 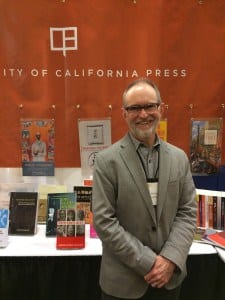 “I visited The Left Front at the Grey Art Gallery (NYU), On Kawara—Silence at the Guggenheim, the permanent collection at MoMA, and Printed Matter at NYU. The Left Front is an excellent introduction to the art and politics of a decade that now has uncanny resonance for our own historical moment. The CAA panels on art criticism and college writing had great ideas for getting students in front of art and then finding the appropriate words and arguments to communicate their insights and perceptions. I look forward to reading Barbara McCloskey’s The Exile of George Grosz.” 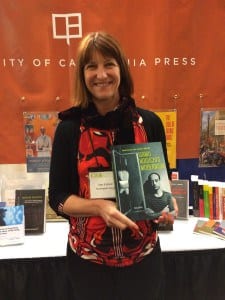 “I saw Madame Cézanne and the Thomas Hart Benton mural America Today, both at the Met. The Benton mural blew me away. It was fantastic to see it re-created as if in the boardroom at the New School. Well, besides seeing my own book on Noguchi(!), I loved seeing Sarah Hamill’s book on David Smith and Sabine Kreibel’s book on Heartfield.” 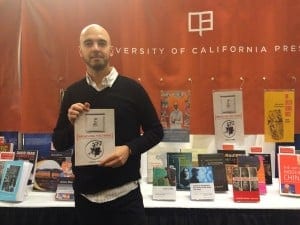 “It was great to finally meet with the whole UC Press crew at the booth.”

—Pedro Erber, author of Breaching the Frame: The Rise of Contemporary Art in Brazil and Japan