Thumbnails, the news and culture roundup at RogerEbert.com, gave a nod to Film Quarterly editor B. Ruby Rich’s column, “Thinking about Triggers, Thumbs, Sex and Death.” The essay, they say, “provides invaluable commentary on a variety of topics, including Steve James’s acclaimed documentary, ‘Life Itself,’ based on Roger Ebert‘s 2011 memoir of the same name.” Here’s a selection from the essay:

Ebert never failed to be generous to films by outsiders, gay or lesbian filmmakers, African-American filmmakers, many directors of color, international talents, or anyone pushing cinema in new directions. And other critics. During the interregnum between Siskel’s death and Richard Roeper’s hiring, he invited me on the show. We reviewed Kimberly Peirce’s ‘Boys Don’t Cry’ (1999), raved about Hilary Swank’s performance as Brandon Teena, debated his/her pronouns, and agreed on two thumbs up. It was classic Ebert: championing a first-time film on a controversial subject, produced by indie film impresario Christine Vachon’s Killer Films. He was the star of a show produced by Disney with millions of viewers and a brand that spanned multiple platforms, but Ebert wouldn’t desert upstart films that were daring, outspoken, and great filmmaking. Even when the cancer that had been in remission came back and got him, Ebert remained a force to be reckoned with. Shifting gears from television to blogging when he could no longer speak, he kept up with the film festivals that had always been his lifeline and kept filing copy, watching screeners, doing his part to hold up the ongoing dialogue about what films are worth seeing, what ideas worth holding, what talent worth supporting. Roger Ebert lived and breathed film to the end. I wonder what he’d have to say about ‘trigger warnings.’

Read it in full at Film Quarterly. 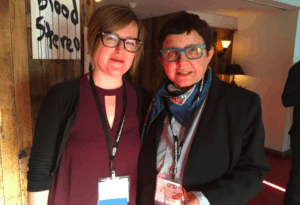