We’re thrilled to announce that John Goodman’s Mingus Speaks recently won the prestigious ARSC Award for Excellence in Historical Recorded Sound Research in the category of “Best Research in Recorded Jazz History.” The award, presented by the Association for Recorded Sound Collections (ARSC), recognizes outstanding published research in the field of recorded sound.

Mingus Speaks brings together a rare collection of in-depth interviews Goodman conducted with the great jazz composer several years before Mingus died. You can hear more about the experience of recording Mingus, as well as music and archival clips from the interviews, in this UC Press Podcast with John Goodman.

Goodman was was recently asked by the Library of Congress to contribute an essay to its National Recording Registry. The Registry selects recordings judged “so vital to the history of America—aesthetically, culturally or historically—that they demand permanent archiving in the nation’s library.” Each year twenty-five recordings are selected. Goodman’s essay is to accompany the Charles Mingus album Mingus Ah Um, one of the 2014 picks. With permission from the National Recording Registry, we are pleased to share Goodman’s essay with you here:

by John Goodman, re-posted from Jazz Inside and Out

In a year (1959) that saw the release of Miles Davis’s Kind of Blue and Ornette Coleman’s The Shape of Jazz to Come, Mingus Ah Um appeared to be a divergent bow to jazz tradition. Yet Mingus was undertaking, like Davis and Coleman, a novel approach to jazz.

Charles Mingus’s music is not for everybody. Some of it is intimidating in its complexity; some is angry and vituperative; some verges on the bleating of free jazz. Mingus the person was everything the music represents, plus a lot more. He had his tender moments, a fine sense of humor, and a deep knowledge of how to make jazz traditions resonate in his music. Mingus Ah Um captures the full flavor of the man better than most any of his recordings. (The title played with the case endings in Latin declensions—Mingus showing off a bit perhaps, and asking to be taken seriously.)

It is the best musical redaction of middle-period Mingus, with his musicians playing at the top of their form in compositions that have never been equaled. It also turned out to be the best-seller of all Mingus’s albums. Ah Um grew out of the Jazz Workshop approach that Mingus established early on in his New York career and used through much of his later years. From the original liner notes by Diane Dorr-Dorynek quoting Mingus:

My present working methods use very little written material. I ‘write’ compositions on mental score paper, then I lay out the composition part by part to the musicians. I play them the ‘framework’ on piano so that they are all familiar with my interpretation and feeling and with the scale and chord progressions to be used. Each man’s particular style is taken into consideration. They are given different rows of notes to use against each chord but they choose their own notes and play them in their own style, from scales as well as chords, except where a particular mood is indicated. In this way I can keep my own compositional flavor in the pieces and yet allow the musicians more individual freedom in the creation of their group lines and solos.

This approach to playing jazz enabled singular and collective improvisation to work within a structure. I think Mingus was the first to fully develop such a method since Jelly Roll Morton. What he accomplished in Ah Um was not only a way to give form to freedom but a means to echo and respect basic jazz traditions and styles. The album is a kind of mini-jazz history, an epitome of what jazz music can convey.

On Ah Um Mingus has fun with jazz styles while interpreting them in his unique way and giving them a new flavor. He also pays direct musical tribute to Duke Ellington, Charlie Parker, Lester Young and Jelly Roll Morton. But this is no pastiche; it’s all Mingus music.

“Better Git It in Your Soul” takes blues and gospel and makes out of it a new kind of jazz. It’s a quick-tempo gospel dance and marks the first time anyone had ever used 6/8 time in a jazz context. There is wonderful use of repetition, pedal points (a Mingus trademark), riffs, handclaps and hollers. Booker Ervin’s solo is amazing and gutty.

Mingus got word that Lester Young had died while the Mingus band was performing one evening at the Half Note in New York. John Handy reported that the leader then began to play a slow sad blues which not long after became the elegiac “Goodbye Pork Pie Hat” that you hear on Ah Um. Handy’s moving solo reinforces the mood, and there has never been a finer jazz tribute to a fellow musician.

Other highlights on the album: “Boogie Stop Shuffle” moves into a fast-paced boppish chorus over a choo-choo train rhythm, with fine coordinated playing by all. “Self-Portrait in Three Colors” features the band playing in unison on a beautiful sophisticated melody. “Pussy Cat Dues” is elaborated by Knepper’s resonant trombone solo, Parlan’s bluesy piano, Handy’s clarinet, and the leader’s bass. This is Mingus blues of the first order.

“Fables of Faubus” makes its first appearance on Ah Um, but without the vocal by Mingus and Dannie plus the fine work of Eric Dolphy (alto) and Ted Curson (trumpet) that distinguished its later version on Mingus Presents Mingus (1960). Faubus, one remembers, ordered out the National Guard in 1957 to prevent black teenagers from entering Little Rock Central High School and was vocal in his opposition to integration. Mingus & Co. tarred and feathered him in the later recording. In Ah Um, his first album for Columbia, the company may have suppressed the lyrics, as Mingus later charged. Without lyrics, the song loses some of its punch. Mingus, who never hid his political feelings, played and recorded it often.

The late ‘50s had been very good years for Mingus: he made exceptional records for Atlantic (and would again in the ‘60s). Columbia lured him to record Ah Um,largely because Teo Macero had come to the company as its primary jazz A&R man/producer. Mingus and Teo were friends and Teo had played alto on some of Mingus’s earlier Jazz Workshop efforts.

I interviewed Teo in the course of compiling my book of interviews with Mingus and others, Mingus Speaks. He thought that the music on Ah Um might have been possibly “too far ahead of the consumer” because the album had slow initial sales. “Now [1974],” he said, “’Fables of Faubus’ is very famous and ‘Porkpie Hat’ and the other things that he did are all things he does now; fifteen or sixteen years later he’s starting to do them in concert.” The music of Ah Um has indeed been very lasting and has been played by numerous jazz artists.

There have been several releases of the album and some of its outtakes over the years, but I still prefer the original nine tunes, which constituted a musical program as Mingus intended. He was very careful about how he programmed his music, one reason why Mingus Ah Um has been a success. The album also looks forward to the coming band with Dolphy when Mingus would work his music into a freer mold, beginning with The Black Saint and the Sinner Lady(1963). His later years produced Let My Children Hear Music (1972), his most ambitious and accomplished work.

But Ah Um was his first breakthrough with the jazz public at large and for many, including yours truly, it brought the particular genius of Mingus to light. As one reviewer put it, the album “captures everything jazz music is about.”

In Memoriam: Sheila Levine
B. Ruby Rich on Trigger Warnings 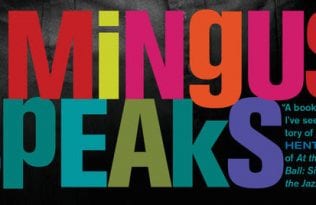