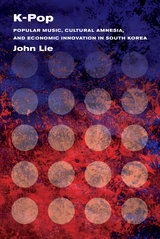 With Psy’s Gangnam Style video at over 2 billion views on YouTube (yes—that’s a b), it’s safe to say that K-pop has taken over the globe. John Lie’s forthcoming book, K-Pop: Popular Music, Cultural Amnesia, and Economic Innovation in South Korea, seeks at once to describe and explain the emergence of this phenomenon and to make sense of larger South Korean economic and cultural transformations.

Lie, who was interviewed on the subject for The Korea Herald, says that K-pop exemplifies the major social and cultural changes that have happened in South Korea over the last 20 years. He explains:

There are very particular features about South Korea that make it an economically innovative country. It is very unique in that it imports everything and adapts very quickly. … The same strategies and tactics that (the companies’) innovators used, you can see in K-pop is well. They get whatever is good―design from Denmark, production technology from Germany, marketing strategy from Japan―and bring them together. And K-pop is the same. They don’t really rely much on Korean things but rather outsource almost everything.

K-Pop provides not only a history of South Korean popular music—the premodern background, Japanese colonial influence, post-Liberation American impact, and recent globalization—but also a description of K-pop as a system of economic innovation and cultural production.

See if you can spot some of the influences Lie describes in the video below, 2NE1’s “I Am the Best.” Its 94 million view count suggests that K-pop’s reach and appeal is limitless.