In this guest post, UC Press author Joy H. Calico shares the origin story behind her new book, Arnold Schoenberg’s A Survivor from Warsaw in Postwar Europe. Calico was recently interviewed by the BBC’s Music Matters about her book and what the reception of Schoenberg’s work tells us about cultural attitudes. 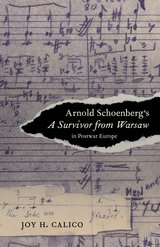 This book began life as a footnote.

I was writing about Jüdische Chronik, a collaborative piece by composers from both East and West Germany from 1960-61.  I had the distinct impression that it was strongly influenced by Arnold Schoenberg’s A Survivor from Warsaw (1947), but could find no evidence of a link in composers’ archival sources.  Reviews of its premiere in 1966 did not make the connection either, and I began to wonder: just how well-known was Schoenberg’s Holocaust cantata in postwar Europe?

I contacted the Arnold Schoenberg Center in Vienna, and was told that they did not have systematic records of performances that postdated the composer’s death in 1951.  I combed through archival holdings for Schoenberg’s widow as well as the publisher’s records, and began to piece together a story, based on surviving documentation, for its performance and reception history in Europe between 1948 and 1968.

Before I knew it, the footnote had taken on a life of its own.

Here’s why: A Survivor is a very short piece about the Holocaust, written by a Jewish composer who was born in Vienna and self-identified culturally as German but emigrated to become an American citizen, a composer who had been both idolized and reviled as a pioneer of the twelve-tone compositional method.

In other words, this piece had everything – everything, that is, that might provoke a reaction in postwar Europe.  And provoke it did.  I began to conceive of A Survivor as the canary in Europe’s cultural-history coal mines during the early Cold War (1948-1968). In this interview with BBC Radio 3 for the show Music Matters Tom Service calls it a Rosetta stone (I wish I had thought of that!).  [Service sets up the interview with this reference at 15’40” – 17’56”]

I reconstructed six micro-histories: two from the west (West Germany, Norway), three from the Soviet bloc (East Germany, Poland, Czechoslovakia), and one politically neutral (Austria).  To paraphrase Tolstoy, all postwar European contexts share similarities but each one also has its own unique and fascinating story to tell.  [17’58” – 23’48”]  Questions about both the aesthetics and the ethics of A Survivor have dogged the work since its premiere, and conductors often attempt to mediate those issues through programming decisions. [23’49” – 27’12”]

The BBC’s Service, musicologist Paul Griffiths and I also discussed the cultural work A Survivor is doing in the United States nowadays.  George Takei, famous Star Trek actor and queer icon, has recently begun performing the role of the narrator (the survivor).  I read this as a distinctly American take on the work: Takei was imprisoned with his family in Japanese-American internment camps from 1942-45.  That experience gives him a particularly American type of twentieth-century survivor credential that informs his performance and audience response to it.  [27’13” – 28’05”]

A Survivor is still provocative nearly seventy years on.  Some might attribute this to intrinsic artistic merit.  I am inclined to read it as an indication that many of the nerves laid bare after WWII did not heal or lose their sensitivity during the Cold War; they remain exposed in its aftermath as well.

Joy H. Calico is Associate Professor of Musicology and Director of the Max Kade Center for European and German Studies at Vanderbilt University and the author of Brecht at the Opera (UC Press).

CATEGORIES: From Our Authors, History, Music 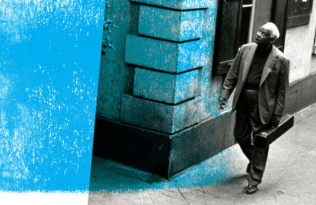