One of the most extraordinary poems included in Jerome Rothenberg and Jeffrey C. Robinson’s forthcoming magisterial Poems for the Millennium, Volume 3: The University of California Book of Romantic and Postromantic Poetry is Sousândrade’s (Joaquim de Sousa Andrade, 1832-1902) “Wall Street Inferno.”

Nearly forgotten after his own time, the great Brazilian poet Sousândrade has become, in Latin American terms at least, the epitome of a late experimental romanticism and a prefigurer of new poetries to come. “In 1877,” the Cuban novelist Severo Sarduy writes,”this contemporary of Baudelaire, who lived in the United States for ten years, wrote … a long poem entitled O guesa errante (The Wandering Guesa), which culminates in an astonishing sequence ‘The Wall Street Inferno,’ that might be described as textual marquetry or polyphony, in which layout, neologisms, verbal montage, and sudden changes in tone evoke the newspapers of that period and the hectic world of the stock market. It is a typographical explosion in a pre-Poundian expanding universe.

From O GUESA ERRANTE: THE WALL STREET INFERNO
(Guesa having crossed the Antilles, believes himself rid of the xeques and enters the New-York-Stock-Exchange; the Voice, from the wilderness:)

(The Voice barely heard in the tumult:)

(j. Miller on the roof of tammany wigwam unrolling
the garibaldian mantle:)

— Bloodthirsties” oh Sioux” oh Modocs”
To the White House” Save the nation,
From Jews” from aberrant
Goth errant”
From most corrupt agitation”

— Just Tennyson and Longfellow,
Good morals inspired in us all:
Not Donahues, Arthurs
Strikers,
Nor John Byron, nor Juvenal”

(Tilton moaning with the head pains of Jupiter:)

Newton’s Principia, Shak’spear’, Milton,
The Ormazd, the Vedas, Koran,
The Thousand-One Nights,
And whip bites
Christ dealt out and had to withstand:

There is twixt Harold and Guesa
A greatly diverse circumstance,
One’s voice, strong output,
But bot foot;
The other, “tweak voice” and firm stance.

And comets to meteorites comment
As they pass by shaking the air . . .
= Look at each old
Miniworld
That flaunts whirling and shining there”

(La Fontaine using in a fable the killers of Ines de Castro:)

— Ants are not fond of grasshoppers,
The vampires are Luís Varela’s;
They’re not Pedros’ crude;
They’re lewd
Goats, rodents, and monkeys, and ’dillos.

— Jur’paripirás (not Evang’line)
The Governor of Maranhão,
Baia’s spicy girls
Of the world,
Transferred, and this is his crown.

— Good vates, there’s naught so opposed
To the preservation of life
Than as some rogues do,
To woo
(Manu’s law) another man’s wife”

— The crows sing so well, Jehovah”
Jehovah” Ku-Klux robed in white
Making other worlds so
Deep below,
They made darkness . . .  out of the light”

Pharsalus’ matinée is dark, Wolfgang,
And its sizeable price would astound”
No notable verse can
Cost more than
Guesa, which insolv’ble was found”

(Episcopalians with the church full of faithful and going bankrupt:)

— Vast congregations could rebuild
Their churches in one day alone . . .
The dollars falter” . . .
The altar,
Cross, everything, creditors own”

(Catholics, fearing the glory of bankruptcy, close the door to beggars:)

— If they don’t pay cash they can’t enter”
Latin Mass, Pope, Heaven too”
Such confessionals” . . .
Transgressionals
Only burnt do they give God what’s due”

— Won’t honor Messiah’s parents
Only he who dishonors his own:
As teachers of value
And love, you
The King of the Jews dethrone.

(Bad-sinners good-apostles, enlightened with the beliefs of remission
and resurrection of the dead, seeing Jerry McCaulay and reseeing Frothingham in “Christ would not suit our times”:)

— Peccavi says one, and transforms
Pagoda to Christian mission;
In a church the other:
Holy Mother”
“Christianity’s superstition””

Reserved is the world, in which man
Bears the seal of the Begetter
And broken . . .  Frothingham
Or Brigham,
Mirrors; and Beecher is better.

(Epicurus teaching between Chemistry and Psychology:)

— Poor ideal God . . .  fleshly flower,
Satan’s garden: ergo, betray;
Hunger is dark
And have a lark
The vermin, because of decay.

(Stokers of the furnace reducing the original sin to algebraic formulas and
to the “New Faith” (“moral rapid transit”) the “In God we trust”
of the five cents:)

— Cold, industry, practical life,
Go ahead” oh, oh, such a heart” . . .
To this air, vital vent
Spiraling sent,
Breeze or Bull-hurricane or fart”

— Just the cadaver’s majestic,
Such ideal to the real descends;
Ice is fire . . . and each divus
Alive
Just to its animal attends.

= Cuban Codezo, Young Esquire,
Each other do cheat and ensnare,
Mistic Proteus cult
Occult
Of Hudson-Canal-Delaware”

Norris, Connecticut’s blue laws”
Clevelands, attorney-Cujas,
Changed to zebras and made
To parade
Two by two, a hundred Barrabas”

(Friends of the lost kings:)

— Humb of railroad and tel’graph,
Tried to steal the heavenly flame,
That the world throughout
Should sprout
The Spangled Star and her acclaim”

—“The universe salutes the queen” . . .
And Patriarchs laud and admire . . .
(With a liberal king,
The worst thing,
They established a moon empire).

— A sad role on earth is performed
By kings and bards, heav’n’s company,
(And Strauss waltzing)
Singing
In Hippodrome or Jubilee.

(Brokers finding the cause of the slump in the Wall-Street exchange:)

— Exeunt Dom Pedro, Dom Grant,
Dom Guesa, brave voyagers three:
Each with golden till
They still
The Moor of the turbulent sea.

— The Holy Spirit of slavery
Is a single-Emperor state;
That of the free, verse
Reverse,
Doth all mankind coronate” 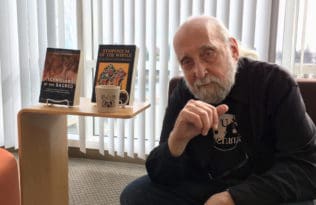