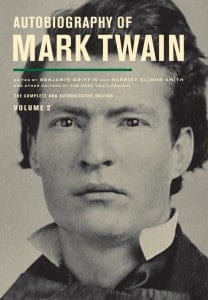 Banned Books Week is the celebration of books challenged in libraries and classrooms across the nation. Books are banned for various reasons, but most are banned for content not deemed appropriate for readers. The list of banned books is lengthy, and contains some of the most timeless pieces of literature ever produced. It is the dream of many authors to have a book on the banned books list.

One of the most prominent authors on the list is Mark Twain. The Adventures of Huckleberry Finn has met consistent resistance since it was first published. Benjamin Griffin–an editor of The Autobiography of Mark Twain, Volume 2—recently contributed to the BookPage blog on some of the instances of The Adventures of Huckleberry Finn being banned. The post can be found here.

In The Autobiography of Mark Twain, Volume 2, Mark Twain has several passages where he talks about the illicit nature of his books. Reading these passages, it is easy to see where Huck and Tom got their penchants for stirring up trouble and controversy in their own stories. Twain understood that controversy-much like the controversy of banned books nowadays-simply gives more air to the books and characters that censors try to bury.

“When people let ‘Huck Finn’ alone he goes peacefully along, damaging a few children here and there and yonder, but there will be plenty of children in heaven without those, so it is no great matter. It is only when well-meaning people expose him that he gets his real chance to do harm. Temporarily, then, he spreads havoc all around in the nurseries and no doubt does prodigious harm while he has his chance. By and by, let us hope, people that really have the best interests of the rising generation at heart will become wise and not stir Huck up.” —The Autobiography of Mark Twain, Volume 2

Autobiography of Mark Twain, Volume 2 By the Numbers

Autobiography of Mark Twain, Volume 2 By the Numbers