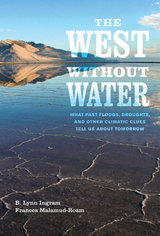 The summer issue of California Magazine features an interview with UC Berkeley professor Lynn Ingram, co-author of The West without Water: What Past Floods, Droughts, and Other Climatic Clues Tell Us about Tomorrow. The new book, which Ingram wrote with colleague Frances Malamud-Roam, documents the tumultuous climate of the American West over twenty millennia, with tales of past droughts and deluges and predictions about the impacts of future climate change on water resources. Looking at the region’s current water crisis from the perspective of its climate history, the authors ask the central question of what is “normal” climate for the West, and whether the relatively benign climate of the past century will continue into the future.

As a paleoclimatologist who studies climate data over the course of thousands of years, Ingram is able to identify patters not readily apparent to scientists looking at a smaller window of only 50-100 years. Citing the megadroughts and floods of centuries past, Ingram cautions against assuming that California’s relatively mild climate is here to stay. “We’re in this state of complacency where we think that everything is going to be just fine somehow,” Ingram tells California. “Unfortunately, I think that’s not the case.”

Why will Elementa articles be published in EPUB3?
Autobiography of Mark Twain, Volume 2 By the Numbers