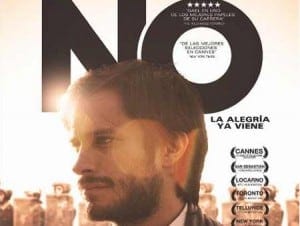 The real life events behind No, the Chilean film nominated for the Academy Awards Best Foreign Language film, are even more compelling than what appears on screen. In 1988 General Augusto Pinochet held a one-man presidential plebiscite seeking to extend his rule for another eight years. It was not the first time his regime had held a referendum. In 1978, following a United Nations resolution condemning human rights violations in Chile voters were asked to cast “yes” or “no” ballots in support of Pinochet “in the face of international aggression against Chile.” The official results of the vote, held without an electoral registry, showed 75 percent in favor of the regime. In September of 1980 the regime held another plebiscite to ratify its new, authoritarian constitution and to extend Pinochet’s rule for another eight years. Once again, the vote was held without an electoral registry and the results showed 67 percent in favor.

According to the terms of this new constitution, a third plebiscite would be held in 1988 in which voters would be asked to cast “yes” or “no” ballots for a presidential candidate nominated by the regime. If the “yes” vote won, this candidate would rule for another eight years; if the “no” won, an open presidential election would be held a year later. But this time voters would be registered, political parties would be officially recognized and polls monitored by party representatives as well as international observers. And in a move which regime officials probably regretted, both “yes” and “no” campaigns would be given 15 minutes of television time every evening for four weeks prior to the vote.

Given the irregularities surrounding the regime’s two previous plebiscites, it was not easy for the “no” campaign to convince Chileans that this referendum would be clean and that the voting would be secret. The “no” broadcasts used all the tricks of modern advertising and an unrelenting cheerfulness to get its message across: Chile, la alegria ya viene. Chile, happiness is on its way.

The film shows how campaigners were under surveillance—and the reality was more menacing. Patricio Bañados, the television and radio personality who hosted the “no” broadcasts, told me in an interview that he had received death threats—some via anonymous phone calls, and at least one delivered indirectly by a cab driver inquiring if he’d ever thought about how he’d like to die. Behind the scenes there were indications that Pinochet might suspend the plebscite and launch a repressive crackdown if the results showed he was losing. American ambassador Harry Barnes sent a cable to Washington (PDF) warning that

“Pinochet’s plan is simple: A) if the “yes” is winning, fine; B) if the race is very close, rely on fraud and coercion ; C) if the “no” is likely to win clearly then use violence and terror to stop the process. To help prepare the atmosphere the CNI [the regime’s secret police] will have the job of provoking adequate violence before and on October 5. Since we know that Pinochet’s closest advisors now realize he is likely to lose, we believe the third option is the one most likely to be put into effect with substantial loss of life.”

On the night of the plebiscite regime officials released some very partial returns showing Pinochet ahead, with a fraction of the vote counted. Then, ominously, there were no more announcements. At midnight the commanders of Chile’s navy, national police and air force entered the presidential palace for a meeting with Pinochet, and Air Force commander General Fernando Matthei decided it was time “to pull out the detonators.” He approached a group of Chilean journalists and told them the “no” vote had clearly won. At their meeting Pinochet tried to get Matthei and the other commanders to sign a document giving him enhanced powers, including more control over the navy, air force and police—but they refused.

And so began Chile’s democratic transition. The following year elections were held, with a new civilian president and congress taking office.

Mary Helen Spooner is a journalist who began working in Latin America in 1977, including nine years as a foreign correspondent in Chile. She has reported for ABC News, The Economist, The Financial Times of London, and Newsweek. She is the author of the UC Press books The General’s Slow Retreat: Chile After Pinochet and Soldiers in a Narrow Land: The Pinochet Regime in Chile, Updated Edition.