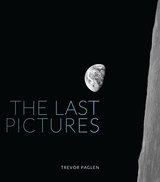 If you’re in New York this September, do whatever it takes to get yourself to Bryant Park on Wednesday, September 19 at 7:00 pm. Live from the NYPL will host legendary director Werner Herzog in conversation with UC Press author Trevor Paglen for a special presentation on The Last Pictures—a golden disc of images created by Paglen, to be launched into outer space attached to the exterior of communications satellite EchoStar XVI. Pulitzer Prize-winning poet Tracy K. Smith will also give a reading.

The Last Pictures, co-published by Creative Time Books, is rooted in the premise that these communications satellites will ultimately become the cultural and material ruins of the late 20th and early 21st centuries, far outlasting anything else humans have created. Inspired in part by ancient cave paintings, nuclear waste warning signs, and Carl Sagan’s Golden Records of the 1970s, Paglen has developed a collection of one hundred images that will be etched onto an ultra-archival, golden silicon disc. The disc, commissioned by Creative Time, will then be sent into orbit onboard the Echostar XVI satellite in September 2012, as both a time capsule and a message to the future.

Read an excerpt on our website, then visit The Last Pictures site to learn more about this one-of-a-kind project and see a schedule of Artist Talks.