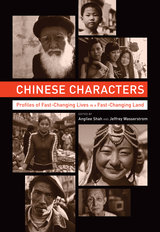 Imagine travelling through China in 1994 by way of the Trans-Siberian Railway, with little knowledge of the country’s culture or language, and a plan to spend “as little time as possible there.” New Yorker writer Peter Hessler describes the bizarre details of the experience, from talking alarm clocks that only speak in Russian, to the creative maneuvering of goods to avoid customs fees in Mongolia, in this interview with Angilee Shah in the Atlantic.

Shah is the co-editor, with Jeffrey Wasserstrom, of the new volume Chinese Characters: Profiles of Fast-Changing Lives in a Fast-Changing Land (UC Press, September 2012). Hessler is one of 15 contributors to the book who challenge oversimplified views of China by shifting the focus away from the question of China’s place in the global order and zeroing in on what is happening on the ground.

Despite initial plans, Hessler ended up staying in China for 11 years after his trip on the Trans-Siberian, and went on to become an award-winning journalist, reporting for National Geographic, the New Yorker, the Wall Street Journal, and writing three books.

Read the Atlantic interview for more on Hessler’s crazy first days in China, where he and a friend found work playing foreigners in a Hong Kong soap opera and auditioned for a Disney movie. Hessler also tells the backstory behind his chapter for Chinese Characters, an investigative piece on the factory town of Lishui.

Also be sure to check out the Chinese Characters Tumblr, which shares stories from the book and news from China (highly recommended: “Girl from small Liaoning town brilliantly nails “Rolling In The Deep”. Madness ensues.”). You can also like Chinese Characters on Facebook.