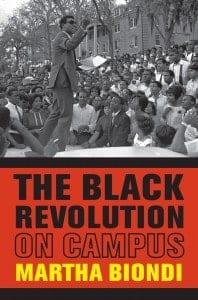 Over the next few months, we’ll be introducing you to some of the authors and books that make our Fall 2012 list so promising.

First up, we have this remarkable article from The Chronicle of Higher Education exploring a new generation of Black Studies Ph.D.s. In the article, Martha Biondi, the director of graduate studies and an associate professor of African-American studies and history at Northwestern, was quoted at length about how contemporary graduate students “have forged a path of integrating top-notch scholarship with social and political relevance.”

In the late 1960s and early 1970s, Black students organized hundreds of protests that sparked a period of crackdown, negotiation, and reform that profoundly transformed college life. At stake was the very mission of higher education. Black students demanded that public universities serve their communities; that private universities rethink the mission of elite education; and that black colleges embrace self-determination and resist the threat of integration. Most crucially, black students demanded a role in the definition of scholarly knowledge.

Associate Professor Biondi masterfully combines impressive research with a wealth of interviews from participants to tell the story of how students turned the slogan “black power” into a social movement. Vividly demonstrating the critical linkage between the student movement and changes in university culture, Biondi illustrates how victories in establishing Black Studies ultimately produced important intellectual innovations that have had a lasting impact on academic research and university curricula over the past 40 years. This book makes a major contribution to the current debate on Ethnic Studies, access to higher education, and opportunity for all.

Take a Trip to the World of Mark Twain