If you notice a bittersweet tinge to the ambience of the book division these days, it might be due to the fact that one of UC Press’s most beloved editors, Stan Holwitz, is about to retire. In his 31 years at the Press, Stan has not only served in leadership capacities, but also has acquired some of the seminal works on our social science list. Hailing from the Bronx, Stan did his apprenticeship in publishing in New York, leading divisions of MacMillan, DC Health and Academic Press, before being recruited by former Press Director, James Clark, to spearhead the Los Angeles office of the Press. For almost 25 years Stan worked on the UCLA campus, developing and broadening our programs in anthropology, archaeology, sociology and political science before he came up to Berkeley in 2002. Some of Stan’s impressive acquisitions include Why Vietnam?, by Al Patti, an insiders’ account by a soldier of the US’s early maneuvering in Vietnam after World War II; Europe and The People Without History, by Eric Wolf, which has sold more than 100,000 copies; Aids and Accusation, by Paul Farmer, winner of the MacArthur ‘genius’ award; and Barry Moser’s beautifully illustrated editions of the Divine Comedy, the Wizard of Oz, Alice in Wonderland and Through the Looking Glass.

What makes Stan Holwitz such a key member of the Press editorial team is his unerring editorial instinct, consisting of equal parts intellectual initiative, emotional intelligence, a keen gut response, and a well-honed sense of empathy.  Stan is a people person, unafraid, for example, to propose that the renowned Oliver Sacks, who became another of Stan’s star authors, expand his articles about deafness into a short book; the resulting UC Press publication, Seeing Voices, has sold over 50,000 copies in hardcover. But Stan is valued here for more than his formidable achievements as an editor; for his colleagues, Stan’s affectionate, menschy persona has won a place in our hearts. Many of us value our daily squeeze on the elbow from Stan as he makes his ebullient morning peregrinations around the Press to welcome us each day. For his immense kindness as well as for his towering contributions to the success of the Press over the last decades, we salute you, Stan Holwitz.

Where Are We In This Picture?
A Feast From Our Authors: Darra Goldstein 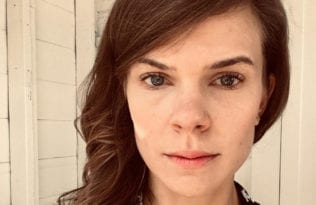 Check out our new digs