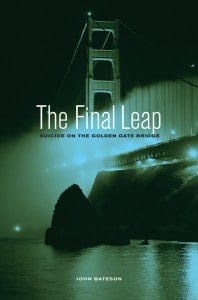 May 27, 2012 will mark the 75th anniversary of the construction of the Golden Gate Bridge. One of the most iconic structures in the world, the bridge combines amazing engineering, breathtaking views and everyday utility along with the much darker secret that it is the world’s top suicide spot.

Weaving drama, tragedy, and politics against the backdrop of a world-famous city, The Final Leap is the first book ever written about Golden Gate Bridge suicides.

From the remarkable site that John Bateson has assembled to compliment his book:

In 1996, after I became executive director of a 24-hour crisis center in the Bay Area, everything changed. I learned facts about the  bridge that astonished me, mainly because I felt I should have known them already. For instance, I learned that the original design included a higher railing specifically to protect against suicides. In a last-minute decision, it was scrapped to enhance the view. Also, at one time the bridge had a safety net. It was installed during construction and saved the lives of 19 workers who fell into it accidentally. When the bridge was completed, the net was removed.

Another thing I learned was that one section of the bridge has had a barrier for years. It’s chain-link, eight feet high and 350 feet long. It’s not pretty and it’s not there to prevent suicides; its function is to keep people from dumping garbage onto Fort Point. Similarly, all of the surveillance equipment on the bridge isn’t intended to prevent suicides. Rather, it’s for security purposes since the Golden Gate Bridge is considered to be a potential target for terrorists.

I also learned facts about the people who jump that surprised me. For instance, the vast majority live nearby. Despite the myth that the bridge attracts troubled and depressed souls from around the world, its lure is largely local. Also, the average age of Golden Gate Bridge jumpers is considerably younger than that of other suicide victims. More than 10 percent are teens. Perhaps most disturbing of all, because of the short railing, three young children have been thrown over the side by parents who jumped after them.

The most important fact I learned was that the Golden Gate Bridge is the top suicide site on earth and the only international landmark without a suicide barrier. When I mentioned this to friends and colleagues, they were stunned. That’s why I wrote The Final Leap. It’s intended to educate readers about Golden Gate Bridge suicides with the hope that more people will realize that this tragedy can’t continue, it has to end. And it can, with the erection of a suicide deterrent. A taller railing or a well-designed net will save lives. If you don’t believe it, if you think suicidal people who are stopped from jumping will kill themselves another way, then I encourage you to read this book—and learn more facts.

The Public Health Crisis on the Golden Gate Bridge