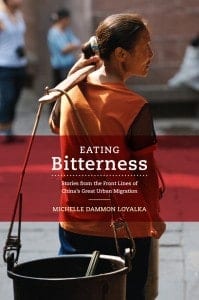 Have you noticed how far a newscast will go to slap a “local interest” angle on an otherwise perfectly newsworthy international story, as if we couldn’t possibly care about something happening on the other side of the globe without seeing another American somehow involved?
Take China, for instance. Every year over 200 million peasants flock to China’s urban centers, providing a profusion of cheap labor that helps fuel the country’s staggering economic growth. In her new book, Eating Bitterness: Stories from the Front Lines of China’s Great Urban Migration, award-winning journalist Michelle Dammon Loyalka follows the trials and triumphs of eight such migrants—including a vegetable vendor, an itinerant knife sharpener, a free-spirited recycler, and a cash-strapped mother—offering an inside look at the pain, self-sacrifice, and uncertainty underlying China’s dramatic national transformation. At the heart of the book lies each person’s ability to “eat bitterness”—a term that roughly means to endure hardships, overcome difficulties, and forge ahead. These stories illustrate why China continues to advance, even as the rest of the world remains embroiled in financial turmoil. At the same time, Eating Bitterness demonstrates how dealing with the issues facing this class of people constitutes China’s most pressing domestic challenge.

Beyond that, Michelle has created a great supplemental website to give much of the background and context to her book.

One would think that this alone would make for a compelling story, but say you also drop a common American object of desire into the mix, namely either an iPhone or an iPad,  and suddenly the issue is brought into sharp focus with an ABC “Nightline” feature and a front page New Times story. One of the other valuable voices in the Times was an op/ed by Michelle seeing the issue through the research she’d completed for the book. This, also, appeared in the Times, this time from their tech and gadget reporter, David Pogue.