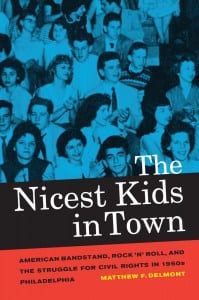 One way to look at a publisher’s ultimate role is that they facilitate the conversation between the author and the reader, but if authors start developing their own sites as well as Matt F. Delmont did for the site to accompany his new book, The Nicest Kids in Town: American Bandstand, Rock ‘n’ Roll, and the Struggle for Civil Rights in 1950s Philadelphia, I may have to go work for my uncle’s slide rule and buggy whip franchise.