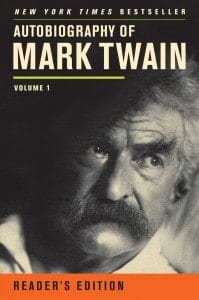 “This first installment of Twain’s autobiography brings us closer to all of him than we have ever come before.”—New York Review of Books

“Mark Twain is terrific company, plain and simple. He knew everyone, went everywhere, seemed to be interested in everything and is capable of making the reader—in 2010—laugh on nearly every page.” —New York Times

“His ‘whole frank mind,’ sharp and funny, is seared onto every page.”—Entertainment Weekly

The year 2010 marked the 100th anniversary of Mark Twain’s death. In celebration of this important milestone and in honor of the cherished tradition of publishing Mark Twain’s works, UC Press published Autobiography of Mark Twain, Volume 1, the first of a projected three-volume edition of the complete, uncensored autobiography. The book became an immediate bestseller and was hailed as the capstone of the life’s work of America’s favorite author.

This Reader’s Edition, a portable paperback in larger type, republishes the text of the hardcover Autobiography in a form that is convenient for the general reader, without the editorial explanatory notes. It includes a brief introduction describing the evolution of Mark Twain’s ideas about writing his autobiography, as well as a chronology of his life, brief family biographies, and an excerpt from the forthcoming Autobiography of Mark Twain, Volume 2—a controversial but characteristically humorous attack on Christian doctrine.