(Editor’s note: This post is written by Jonathan Losos, author of the title Lizards in an Evolutionary Tree: Ecology and Adaptive Radiation of Anoles. The post originally appeared in the blog Anole Annals (try saying that 3 times fast). The journal Nature has just published his paper on the Anole genome. Also, Jonathan has written a piece in National Geographic talking about his paper and it’s importance. Not a bad showing.)

When the genome of Anolis carolinensis is finally published, most attention will focus on how this genome, the first reptile to be sequenced (not including birds), differs from other vertebrate genomes, and what these differences may tell us about genome evolution. No doubt this will be interesting, but the real value of this genome–in my unbiased opinion–resides in the questions we finally will be able to address about the evolutionary process, particularly in one model system of evolutionary study, Anolis lizards. Chris Schneider published a perceptive article, “Exploiting genomic resources in studies of speciation and adaptive radiation of lizards in the genus Anolis,” on this topic three years ago, and I will briefly expand on his points here.

An anole genome will be useful for evolutionary studies in two ways. First, a long-standing question in evolutionary biology concerns the genetic basis of convergent evolution (i.e., when two or more evolutionary lineages independently evolve similar features). Do convergent phenotypes arise by convergent evolution of the same genetic changes, or do different lineages utilize different mutations to produce the same phenotype? In other words, does convergence at the phenotypic level result from convergent change at the genetic level, or can different genetic changes produce the same phenotypic response? In the last few years, molecular evolutionary biologists have produced a wealth of studies investigating whether convergent changes in coat color in rodents, eye and spine loss in fish, bristle loss in fruit flies and many other changes are the result of changes in the same gene, even some times by the very same genetic mutation. Underlying these questions are more fundamental questions about constraints and the predictability of evolution (these topics have been reviewed a number of times in the last couple of years, most recently in a paper by me, in a paper which refers to other recent reviews).

The anole ecomorphs, habitat specialists behaviorally and morphologically adapted to use different parts of the environment. The same set of ecomorphs (with several exceptions) have evolved independently on each island in the Greater Antilles. Figure from “Lizards in an Evolutionary Tree,” based on earlier figures in Ernest Williams’ work.

Anolis lizards are, of course, the poster child for evolutionary studies of convergent evolution. Indeed, convergence has run rampant in this clade. AA has prattled on endlessly about the famous anole ecomorphs, a set of habitat specialist types that have evolved repeatedly on each island in the Greater Antilles to occupy different habitat niches. This convergence is usually studied in terms of limb length, tail length, and toepad dimensions: arboreal species have big toepads, twig species short legs, grass species long tails, and so on, with these traits independently evolving many times. But the ecomorphs are convergent in many other traits that have received less attention: head and pelvis dimensions, sexual dimorphism in both size and shape, territorial and foraging behavior, to name a few, and the more closely we look, the more convergent traits we find. And, further, anole convergence is not entirely an ecomorph phenomenon; some traits vary within an ecomorph class, but are convergent among species in different ecomorph classes, for example, thermal physiology and dewlap color.

In other words, there’s more convergence in Anolis than you can shake a stick at, and the availability of the anole genome sequence will provide the tools to investigate its underlying genetic basis. Anolis is already a textbook example of replicated adaptive radiation; getting at the genetics of this phenomenon will provide great insight on how adaptive radiation occurs and perhaps will help explain why anoles experience such identical adaptive radiations so readily, whereas most evolutionary lineages do not. In addition, given the well understood ecological and selective context for this convergence, genomic tools may make anoles are an ideal group in which to study the interplay between selection and developmental processes in evolutionary diversification. See Thom Sanger’s recent post on the developmental basis of limb convergence for one potential example.

The anole genome will be useful for evolutionary studies in a second way. In recent years, a number of researchers have used anoles to study the process of natural selection and how it produces adaptation. Such studies have been conducted by comparing populations of the same species that live in different environments, by following populations through time to see how they change, and by measuring the action of natural selection directly by following individuals and seeing how long they live. Some of these studies have even been experimental, altering selective conditions such as the presence of predators and seeing how natural selection changes and how, from one generation to the next, the population evolves.

The anole genome now gives us powerful tools to study natural selection and evolutionary change at the genetic level. For many evolutionists, the holy grail is to identify the actual genes under selection, and watch them change in response to selection. Though still not easy, this now is practical. In addition, the genome will provide a wealth of material for other related purposes, such as establishing maternity and paternity to quantify reproductive success–a key component of evolutionary fitness–and thus determine whether some individuals produce more descendants than others.

One could argue that in terms of breadth and depth of knowledge, Anolis is the best-studied species-rich adaptive radiation. Other radiations are well known in some respects, but for few do we know so much about so many aspects of the ecology, behavior, functional morphology, and physiology for so many species, not to mention having a good understanding of phylogenetic relationships and evolutionary processes. The genetic basis of trait variation has always been the one hole in our knowledge of anole evolutionary biology. The anole genome plugs this hole in a major way, and will make anoles an even more important evolutionary case study, allowing us to learn much not only about evolution in anoles, but the evolutionary process in general.

Last stop on the 38th Parallel 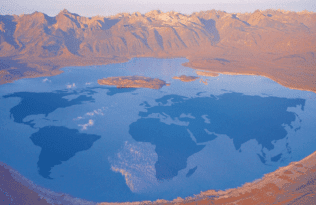 Back to the Parallel